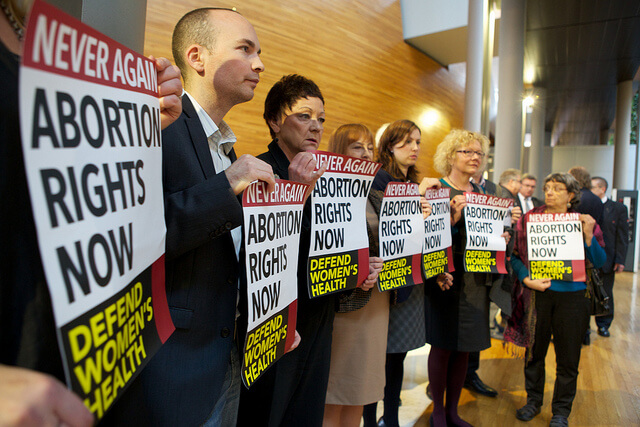 We proposed a piece of law, which would aim to be transformative, to a significant degree, of the prevailing discourse around Irish abortion law.

Abortion Law in Ireland: A Model for Change

Ireland has an extremely restrictive abortion law regime. Since the introduction of the 8th Amendment in 1983, the Constitution has recognised the “right to life of the unborn” in a manner that means that abortion is permissible only where there is a “real and substantial risk to the life, rather than the health” of a pregnant woman that can only be averted by termination of the pregnancy, and where the foetus is not yet viable (Attorney General v X [1992] 1 IR 1).

To establish whether a woman is entitled to access abortion, the procedures outlined in the Protection of Life during Pregnancy Act 2013 are followed. Analysis of the oppressive and ‘unliveable’ nature of this regime is widely available (see, e.g., here, here and here), and there is growing acknowledgement of the unsustainable nature of the status quo. Less clear, however, is what might or should replace it.

In the second half of 2014, Labour Women established a Commission on Repeal of the 8th Amendment. That Commission comprised a political group, a group of medical experts, and a group of legal experts. The legal experts were: Mairead Enright, Fiona de Londras, Vicky Conway, Mary Donnelly, Ruth Fletcher, Natalie McDonnell, Sheelagh McGuinness, Claire Murray, Sinead Ring and Sorcha Ui Chonnachtaigh.

As part of our work, we considered and prepared a ‘model’ of what a legal regime to govern abortion availability might look like if there were a constitutional referendum to repeal the 8th Amendment. There are two parts to this: first, a proposal for constitutional change, and, second, the general scheme of a proposed law which we have called the Access to Abortion Bill 2015. The open-access journal, feminists@law has now published the draft law, together with an introductory and contextualising paper. This post draws heavily on the latter.

In terms of constitutional change, we proposed the removal of the 8th Amendment and its replacement with the following:

The State guarantees by its law to protect and vindicate the right of all persons to bodily integrity and, in particular, to self-determination in all matters of medical treatment.

Nothing in this Constitution shall be read as prohibiting abortion as regulated by law.

Building on this proposed constitutional provision, we prepared a detailed general scheme for a proposed law entitled the Access to Abortion Bill 2015. We prepared this Bill with four principles in mind.

First, we were determined to design a law that would regulate abortion in Ireland by primary reference to the bodily integrity, welfare, agency, autonomy and self-determination of pregnant women while still recognising a public interest in preserving foetal life where possible and with the pregnant woman’s consent. In that sense, we proposed a piece of law, which would aim to be transformative, to a significant degree, of the prevailing discourse around Irish abortion law. In addition, we were informed by the standards contained in international human rights law.

Second, the proposed law designates grounds for abortion that challenge the relatively narrow mainstream consensus on what a reformed law should contain. We go beyond providing for abortion in cases of rape, incest, fatal foetal abnormality, and serious risks to health. In particular (i) we do not provide for a separate rape ground; (ii) we provide for a simple health ground, applicable in early pregnancy and falling short of the requirement to prove severe or disabling damage to health; and (iii) we do not confine the foetal anomaly ground to situations in which the foetus is certain to die within the womb if the pregnancy continues.

Third, the proposed law aims to enshrine an approach to medical practice that replaces pro-natalist paternalism with a welfare orientation, seeing the pregnant woman as the patient and abortion as a medical procedure.

Fourth, we attempt to ensure practical availability of abortion. Thus we include provisions on conscientious objection, provision of services and protection of locations in which services are provided, and review of refusal in any particular case.

The proposed law does not reflect Labour Women or Labour Party policy. The motion passed in support of repeal of the 8th Amendment in February 2015 by the Labour Party Conference proposes changes that are far more limited than those we propose. In addition, this does not necessarily represent our ‘ideal’ legislation; rather, it was crafted in response to the political process in which we were engaged, taking political realities and pragmatic concerns into account. It is, however, a workable model for change in abortion law in Ireland, designed with women’s lived experiences in mind. Through the design and publication of this draft legislation, we hope to establish the possibility of designing and introducing an appropriate and sustainable legislative regime and to offer a realistic and practicable model for debate and development by all interested parties.

The Irish Referendum and the Road to Safe, Legal Abortion

Ireland, Abortion, Right to Equality and Non-Discrimination, Right to Life, Sexual and Reproductive Rights
The Irish government has now announced that it will hold a referendum on repealing the 8th Amendment in 2018. ...