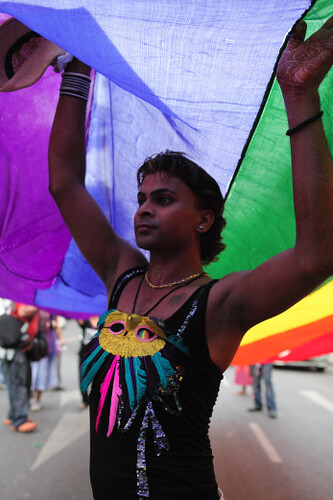 By Ishan Khosla via Flickr, used under a creative commons license CC BY-NC-ND 2.0.

Wrapped in a gay flag at the Pride Parade, New Delhi. 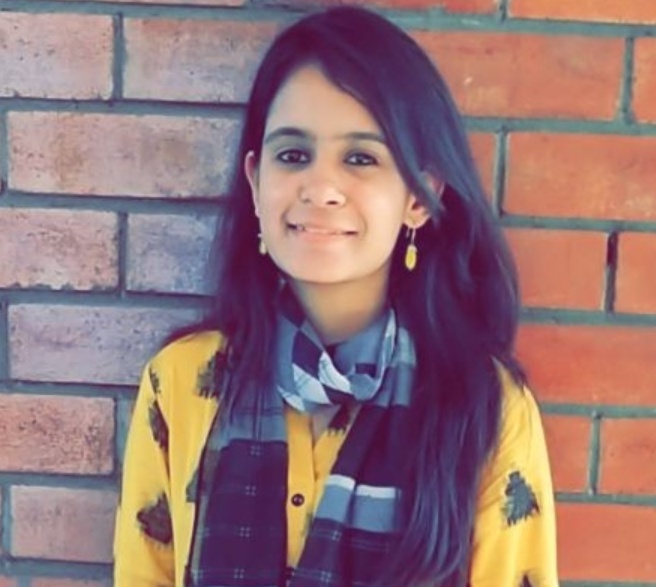 Muskan Bhuteria is a final year law student at O.P. Jindal Global University and is interested in the field of human rights and gender justice.

Image description: Wrapped in a gay flag at the Pride Parade, New Delhi.

In Navtej Singh Johar v Union of India (2018) the archaic law under Section 377 of the Indian Penal Code (IPC) was declared unconstitutional. The five-judge bench of the Supreme Court of India applied the principles of progressive realisation of rights, transformative constitutionalism and stated that “history owes an apology to the members of this community and their families, for the delay in providing redressal for the ignominy and ostracism that they have suffered through the centuries.” Since then, several cases have been filed to grant and protect the rights of the LGBTQI community, including a batch of petitions currently pending before the Delhi High Court relating to the legality of same-sex marriage under the Special Marriage Act (SMA), Hindu Marriage Act (HMA) and Foreign Marriage Act (FMA), among others.

A petition filed by Mr Abhijit Iyer argues for the registration of LBGTQI marriages under the HMA, because the language of the statute is gender neutral and provides no explicit prohibition of same-sex marriages. Another petition relates to allowing a spouse of foreign-origin, married to an OCI (Overseas citizen of India) cardholder to apply for an OCI registration. It argues that that language of the Citizenship Act, 1955 is gender and sexuality neutral, and thus ought to allow such applications when the marriage overseas is registered and is subsisting for a period of two years under Section 7A of the Act.

The petitions state that the non-recognition of the right to get married of an LGBTQI couple is a clear violation of Articles 14 and 21 of the Constitution of India. The differentiation created between heterosexual and LGBTQI couples has no rational nexus with the law’s objective. Non-arbitrary and lawful treatment is an essential criterion under Article 14. Further, the lack of legal acceptance of same-sex relationships causes the social recognition of the such unions to be left behind. The petitions argue that the right to privacy is an integral part of right to life under Article 21, as stated in K.S. Puttaswamy case. The right to privacy includes a person’s choice of sexual orientation, and choice of whom to marry. This discrimination between heterosexual and homosexual relationships is also violative of several international covenants including the UDHR, ICESCR and ICCPR.

In a reply to these petitions, the Central Government argued that in India, marriage is only permissible between a biological woman and man i.e., only heterosexual couples. Further, the State pointed out that marriage is not just a concept within the realm of the right to privacy of an individual, but the state has a legitimate interest in limiting marriages to unions between opposite sexes. It stated that the implication of Navtej Singh Johar was to decriminalise homosexuality and remove the penal offence prescribed under Section 377 IPC, which did not result in a fundamental right to the recognition of marriage between LGBTQI couples. The petitions were seen as being misplaced and unsustainable as the legal recognition of marriage is a question to be determined by the legislature and would not fall within the purview of the judiciary. Countering the argument of a violation of Article 21, the Centre stated that the provision is subject to limitation through procedure established by law. Citing customs, rituals, societal values and the Indian ethos of the country, the Centre rejected the recognition of same-sex marriages since it is contrary to the societal mores and values.

The judiciary has played a proactive role in safeguarding the rights and interests of the LGBTQI community with regards to marriage. In Arun Kumar vs. Registration, the Madras High Court held that the term ‘bride’ in the HMA will include trans women and intersex persons who identify themselves as women, thus giving legitimacy to a marriage between a transwoman and a male person who profess the Hindu religion. In Chinmayee Jena v Orissa, (2020), the Madras High Court allowed a transman and his partner Rashmi (original name withheld) to stay as a live-in couple, thereby protecting their right to sexual preferences. The Court relied on Navtej Singh Johar, and held that Articles 15, 19, 14 and 21 guarantee the constitutional right of a person to choose a life partner of their choice.

The petitions filed in the Delhi High Court are currently pending and the hearing will be live-streamed on 3 February 2022.