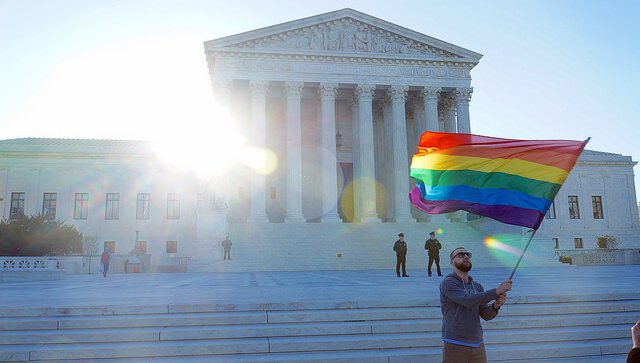 Justice Kennedy says that both the Due Process and Equal Protection dimensions of the Fourteenth Amendment underpin the majority’s conclusion.

The US Supreme Court has ruled, in Obergefell, by a 5-4 majority, that the Fourteenth Amendment to the US Constitution requires States to license same-sex marriage, and to recognise same-sex marriages from other States. The judgment will inevitably attract much attention and discussion, and it is useful to provide a quick summary of the Court’s opinions as a basis for debate.

Justice Anthony Kennedy (the sometimes conservative justice, who often casts a deciding swing vote) has written the judgment for the five-judge majority. In his opinion, he discusses the centrality of marriage, going back to Confucius and Cicero. He states that underlying reasons of principle and tradition mean that the right to marry, protected by the Fourteenth Amendment, should be extended to same-sex couples. Marriage, he says, is about autonomy, a two-person union, the safeguarding of children and family, and other benefits (including in relation to taxation and healthcare) – and all these reasons apply to same-sex couples. Current marriage laws impose stigma and injury on same-sex couples, and counter-arguments (about the effect on opposite-sex couples and the need for more public debate) are unpersuasive. When rights are violated, there should be redress. Justice Kennedy says that both the Due Process and Equal Protection dimensions of the Fourteenth Amendment underpin the majority’s conclusion.

The main dissent (in which two other conservative justices joined), penned by Chief Justice John Roberts, emphasises that decisions about same-sex marriage should be left to legislatures, especially because same-sex marriage changes what the Chief Justice says is the traditional understanding of marriage: a union between a man and a woman. Chief Justice Roberts compares the Court’s same-sex marriage decision to Lochner v New York, a 1905 decision in which the Supreme Court struck down a law imposing a limit on working hours because it was said to restrict liberty. He adds that same-sex marriage cannot be justified on privacy grounds (though this argument is not relied upon by the majority), and says that in some ways the decision might justify “plural marriage”. He ends his judgment by saying that courts cannot foresee all consequences of their decisions, and that in this case there may be harmful consequences for religious liberty.

There are further individual dissents from three conservative justices: Justice Antonin Scalia, Justice Clarence Thomas, and Justice Samuel Alito. Justice Scalia, in characteristically colourful language, proclaims that the majority decision (which he later calls “pretentious” and “egotistic”) is a threat to American democracy. The current Supreme Court justices are not representative, says Justice Scalia – he even notes that they all attended Harvard or Yale, and observes that there are no evangelical Christians or Protestants on the Court. Justice Thomas emphasises that the majority’s conception of liberty is misguided, and focuses on freedom to government entitlements, rather than freedom from the government. He says that dignity is a relevant concept, but that dignity is innate, and cannot be bestowed by government. Further, he argues that the majority decision harms political and religious liberty. Justice Alito adds that the majority’s decision further undermines the “frayed” idea that marriage protects procreation.

The Justice Kennedy majority decision contributes to rights jurisprudence through its references to the importance of identity, liberty, and equality. Some aspects of this decision will be questioned – at one point, Justice Kennedy says that rights can “rise … from a better informed understanding of how constitutional imperatives define a liberty that remains urgent in our own era”, a statement that could well be criticised for offering a shaky (or at least, shakily expressed) foundation for rights. But there are also important statements in his judgment about dignity and the evolving understanding of fundamental interests under the Fourteenth Amendment, which will be commended and could prove significant for future rights-based litigation under the American Constitution. His observation that “new dimensions of freedom become apparent to new generations, often through perspectives that begin in pleas or protests …” is likely to be much quoted in the media and by activists. The Justice Thomas dissent may also provide some surprising food for thought for rights advocates: his support for the concept of dignity, albeit a cramped version of dignity, may well be used as a tool by progressive litigants in future cases.

In some ways, the twists and turn in this decision are unsurprising. The minority focuses on the proper role of a court like the US Supreme Court, and the need for judicial self-restraint; the majority emphasises the importance of interests such as equality and liberty. But the result will be welcomed by marriage equality activists and advocates. Whilst there will be undoubted opposition to today’s judgment, for many the judgment will be seen as a triumph of strategic litigation (involving well-chosen petitioners), a triumph of careful argument, and perhaps – if we might for a moment echo the rhetoric of the Justice Kennedy majority judgment – a triumph of love.