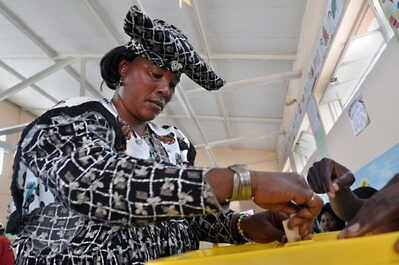 The right to vote, once arduously achieved, must be vigilantly safeguarded. (Image credit: Abayomi Azikiwe via Flickr)

The Electoral Commission of Namibia (ECN) tweeted that the swearing-in of newly ‘elected’ commissioners would take place on 4 October 2016. However, pertinent constitutionality questions around their appointment remain unsettled. Commissioners are amongst the most prominent custodians of voting rights, entrenched in Article 17 of Namibia’s Constitution. Voting rights contestations feature at the core of Namibia’s establishment; her past is largely predicated upon denials based on racial and sexual prejudice.

Since Namibia’s first 1989 elections, there have been a series of challenges to electoral processes based on manipulation and fraud allegations. The most significant of these was the 2009 elections court challenge. All challenges failed on merits. These disputes did, however, succeed in exposing the electoral system as flawed, outdated and in need of reform. This prompted two key reforms: the Third Amendment to the Namibian Constitution (Article 94B) entrenching ECN as a constitutional institution that is mandatorily guided by three principles—independence, transparency and impartiality (the triple standard)—and a parallel legislative process that saw a repeal of the 1992 Electoral Act and enactment of the 2014 Electoral Act (EA). Without fully satisfying this high triple standard, the ECN would not retain the indispensable constitutional legality and legitimacy to direct, supervise, manage, and control the conduct of elections.

Amongst the reforms, the EA introduces a new process for appointing Commissioners to ensure that they are above suspicion and inspire public confidence, as those at ECN’s helm are instrumental to whether elections deliver outcomes that meet the triple standard: key ingredients to any constitutionally executed election. The EA’s appointment process is alternative: first, a Selection Committee (SC) – composed of the Public Service Commission, Law Society and Public Accountants Commission chairs, as well as the Qualifications Authority Director and the High Court Registrar – must be constituted. The EA goes to great lengths in ensuring that the SC inculcates the triple standard, including holding meetings and interviews that are open to both public and media.

The second, alternative, process allows the National Assembly’s (NA) Privileges Committee (PC)—currently constituted of six NA members, three ruling party members including the Speaker, and two opposition members—to carry out Commissioner selection if, for ‘any reason’, the NA Secretary fails to constitute the SC or, once constituted, the SC fails to recommend names to the President within the prescribed time. Compared with the SC’s appointing process, the PC process is scant on details under the EA. For example, although the SC is required to conduct public interviews, the PC is not explicitly under the same duty.

With the lapse of office of the previous Commissioners, an appointment process was initiated. The SC was not constituted in a timely manner to complete the selection, resulting in recourse to the alternative process which abdicated appointment duties to the PC. The reasons for the SC’s untimely constitution are unclear but media reports quote the NA Speaker as citing complications of time and technical reasons.

Consequently, in appointing Commissioners, the PC did not publicly hold interviews of candidates or even make these names known to the public. It exercised its powers under a veil of secrecy, and is said to have made recommendations based on reading submitted résumés alone.

Three issues relating to the constitutionality of appointments thus arise. First, the EA gives the NA Secretary exclusive power to constitute the SC, but does not incorporate measures of accountability and broadly allows “any reason” as acceptable for not constituting the SC. Vague reasons of technicalities are unsatisfactory grounds. Secondly, the alternative process of allowing the PC to appoint Commissioners falls short of the constitutional principle of ECN independence; the PC’s composition exclusively consists of political office-bearers raising doubts as to its members’ political non-partisanship in the appointment process. Thirdly, assuming the PC’s selection powers to be constitutional, the manner in which the PC carried out selection—closed to the public and media and not subjecting applicants to an interview process—falls woefully short of constitutional transparency requirements. No doubt, the triple standard must also be realised at the ECN’s formative stage during Commissioner selection. It follows, therefore, that Commissioners will be sworn-in to office unconstitutionally.

When the NA initially approved new Commissioners for appointment in July 2016, various interested groups, including political parties and civil society, expressed disquiet, primarily citing procedural shortcomings. With the ECN’s constitutionalisation in Article 94B, the triple standard set for the conduct and, crucially, organisation of elections, is much higher. Time will tell whether the frequency of electoral challenges will continue after the recent electoral reform. This issues should be tested in the newly established Electoral Courts. Certainly, the triple standard cannot be laxly applied, particularly when it comes to determining of Commissioners tasked with facilitating democracy through elections. If so, their legislatively un-procedural and unconstitutional appointments will undermine their functions and erode confidence in Namibia as a constitutional democracy, a Commissioner’s individual competencies or integrity notwithstanding. The right to vote, one arduously achieved, must be vigilantly safeguarded.