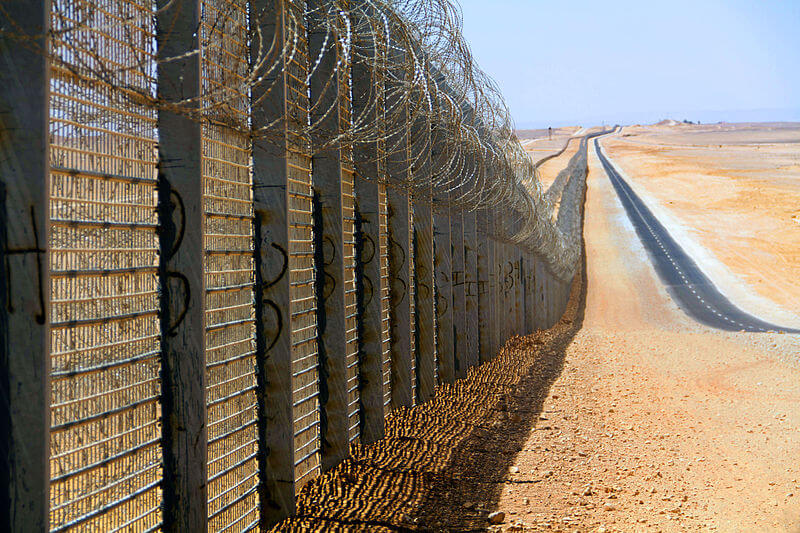 Trapped between the Fences

Following Laura’s post on new Australian policies on asylum seekers, events on Israel’s border with Egypt shed light yet again on the Israeli government’s (mis)handling of (primarily Eritrean and Sudanese) asylum seekers. For a week, a group of about 20 Eritreans fleeing Egypt have been trapped, after they crossed the rather flimsy Egyptian fence into Israeli territory, only to be confronted by a recently constructed fence that Israel has been erecting precisely to stop such asylum seekers from entering Israel—this in addition to halting drug trafficking, arms smuggling and terrorism.

Notably, the fence’s route lies inside Israeli territory. The Israeli daily Haaretz reported that Israeli soldiers have been ordered to prevent the asylum seekers from crossing the Israeli fence. They have given them no food, only limited amounts of water, and some fabric to protect them from the sun, with the explicit purpose of making the asylum seekers turn around. One of the asylum seekers was pregnant; she has had a miscarriage.

On 5 September, ‘We Refugees’, an Israeli NGO, petitioned Supreme Court demanding that the asylum seekers be admitted to Israel immediately and have their asylum applications assessed according to Israel’s international law commitments. On 6 September, a hearing was held before a three-judge panel chaired by the Court’s president, Asher Grunis. The state submitted a written response arguing that it is its sovereign right to prevent entry. The Court has scheduled another hearing for 9 September, noting that it has heard evidence presented by the state ex parte.Later that afternoon, the state has arranged with Egypt that the two women and the boy will be allowed to enter Israel on ‘humanitarian grounds’ (only to be immediately detained at the ‘Saharonim’ detention centre) while the 18 men had to return to Egypt.

In previous judgements, the Israeli Supreme Court has emphasised that the state is bound by the principle of non-refoulement. Like the European Court of Human Rights in Hirsi Jamaa and Others v. Italy (concerning the Italian transfer of Somalian and Eritrean nationals to Libyan authorities), the Israeli Supreme Court ruled in HCJ 4702/94  (Hebrew) that an individual cannot be sent back to a place where his freedom or life would be threatened. Justice Aharon Barak, then the President of the Israeli Supreme Court, established that the principle of non-refoulement can be derived not only from Article 33 of the U.N. Refugee Convention, but also from Article 1 of the Israeli Basic Law: Human Dignity and Liberty. Chief Justice Barak held that the principle “applies in Israel to any governmental authority relating to the expulsion of a person from Israel.”

A more recent and highly pertinent case, HCJ 7032/07 (Hebrew), involved the ‘hot return’ procedure, whereby Israel would return border-crossers to Egypt in coordination with the Egyptian authorities, without assessing the claims of potential asylum seekers. The court dismissed the petition in view of the Israeli government’s announcement that the practice has ceased (primarily due to the political developments in Egypt). However, the court held that “if and when the policy is renewed, it will follow accepted standards of international law and include proper guarantees that will assure the safety of returnees to a high degree of certainty” [par. 12, author’s translation].

Notably, the construction of the (expensive and sophisticated) fence and the refusal to admit those approaching it as asylum seekers while concomitantly refusing to set up a procedure for making asylum applications at the border crossings is part of a comprehensive government policy to deter future asylum seekers from arriving, and to encourage asylum seekers currently in Israel to leave ‘voluntarily’. The majority of asylum seekers in Israel come from Eritrea, and the State offers them (as well as Sudanese nationals) temporary collective protection from deportation without conducting individual refugee status determination procedures and without allowing them to work.

In a previous paper, I have discussed some conceptual and practical difficulties arising from the Israeli position. Moreover, these developments come against the background of legislation passed earlier this year that sanctions detention of ‘infiltrators’ crossing  the Israeli Southern border for a period of up to three years in a new detention centre that has recently been completed in the Israeli Negev desert (see my discussion here). One can only hope that the moral outrage that the scenes at the border has caused, and the realisation that repatriation of Eritreans and Sudanese asylum seekers is unlikely in the foreseeable future, will lead the Israel government to adopt a Convention-compatible asylum policy towards the Eritreans and Sudanese who currently reside in Israel, and to set up a procedure for making asylum applications at its border crossings. Otherwise similar incidents are likely to occur.

Update: A new group of asylum seekers is now at the border – see this story (Hebrew).

The Prevention of Infiltration (Amendment no. 4) Bill: A malevolent response to the Israeli Supreme Court judgment

Israel, Immigration and Asylum
On 16 September, the Israeli Supreme Court, sitting as a High Court of Justice (HCJ), handed down a unanimous ...

Israel, Immigration and Asylum
The Israeli Supreme Court, sitting as a High Court of Justice, handed down a unanimous judgment quashing the 2012 ...