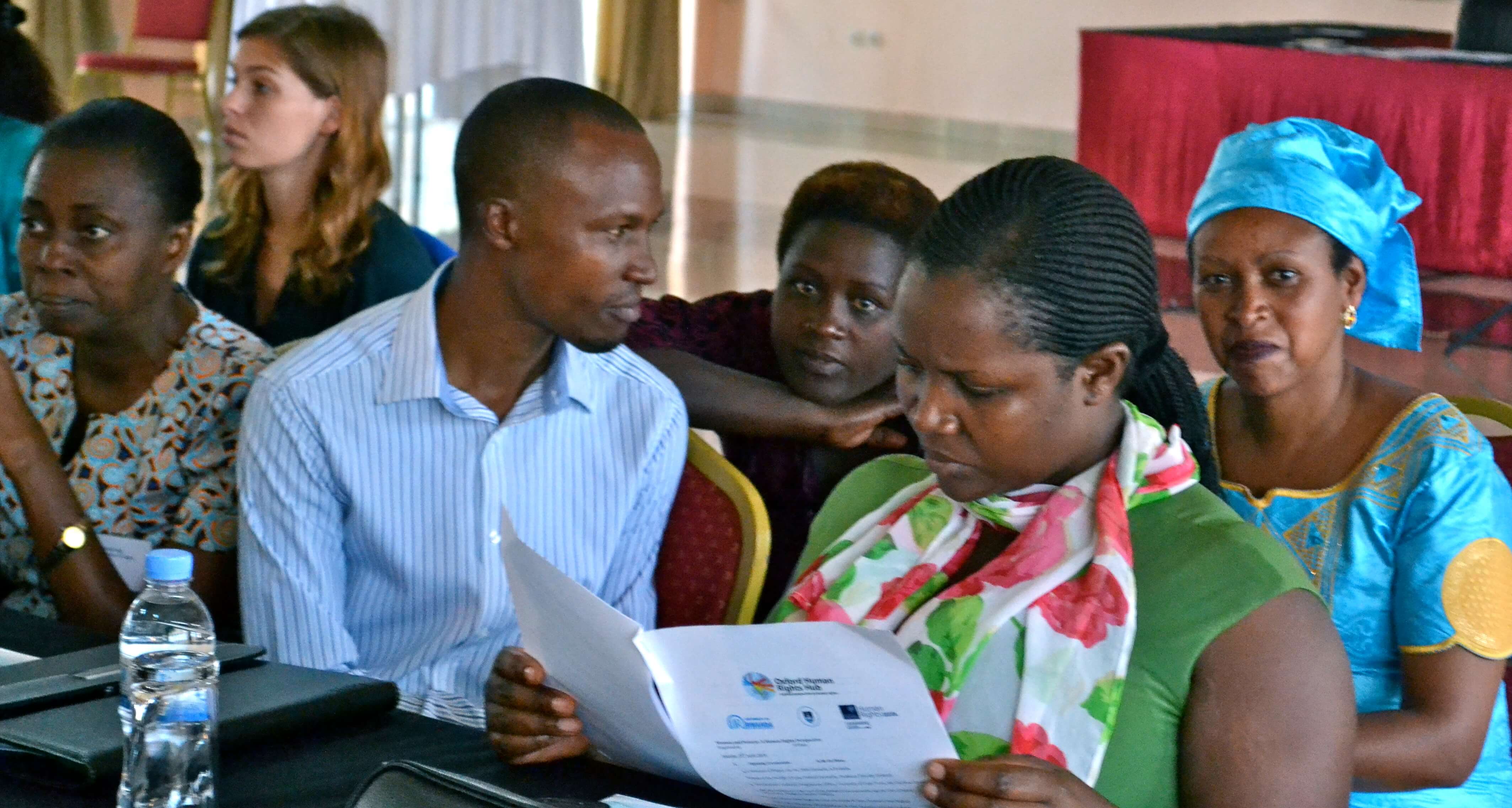 Day two and three of ‘Women and Poverty: A Human Rights Approach‘ continued to build upon the success of day one.  Consistently strong attendance of more than 100 people ensured that lively discussion followed each of the panels.  Photos can be found on the conference page under the ‘Events’ tab above and audio recordings of the sessions will be available shortly.  Below is a short summary of the panel discussion from days .

Day two commenced with an insightful panel on ‘Developing Gender Equality’.  Dr Barbara Havelkova from the University of Oxford started the morning with a presentation that placed the protection of the rights of women who work in prostitution within a substantive equality framework.  Dr Havelkova argued for an asymmetric approach to the phenomenon that regulates prostitution through the client, rather than the worker. This presentation drew on her publication B Havelkova, ‘Using Gender Equality Analysis to Improve the Well-being of Prostitutes ‘ (2011) 18 Cardozo Journal of Law and Gender 53.  Dr Rose Mukankomeje from the Rwandan Environmental Management Authority presented upon the links between gender equality and sustainable development in Rwanda.  She emphasised that gender equality and sustainable development are interconnected: development is a process, gender equality is a necessary condition, and sustainability is the aim.  Finally, Diana Ofwona from UN Women, Rwanda rounded up the panel by looking at the impact of female employment on family and community welfare in conflict Rwanda.  She highlighted that the key to Rwanda’s post-genocide recovery and growth lay in its ability to realise the social and economic potential of women.

Godwin Chinedu Odo of the University of Pretoria had a paper presented in absentia by a colleague that explored using a rights based approach to addressing maternal mortality (slides here).  This paper demonstrated a causal link between advancements in equality and protection against gender discrimination with lower incidents of maternal mortality. Next, Prof Pamela Abbott presented a joint paper by herself and Dr Dixon Malunda (slides here) which gave an illuminating account of women’s participation in the agricultural sector in Rwanda.  Central to this paper was the assessment that there is a large discrepancy between the official rights that women have in the agricultural sector, and what women say about their ability to claim these rights: that law won’t change anything if the underlying cultural practices that prevent women from asserting their rights are left undisturbed. The last speaker on this panel, Yvonne Matuturu from UNESCO Burundi, gave an enriching perspective from Burundi on the potential of education in elevating women and girls from poverty (slides here). She powerfully reminded the audience that education is a right of value in and of itself, and also a means and mechanism for promoting peace.  While improvements in girls’ education in Burundi have been made, there is still work to be done.

The next panel started with a compelling paper by Dr Jeni Klugman, Gender and Development Director at the World Bank, which gave a global overview of economic opportunities for women.  She noted that there are persistent gaps and segregation in the types of jobs, earning and labour-force participation by women when compared to men. Dr Klugman highlighted that education does not always translate into greater gender equality in economic participation. Next, Prof Chris Maina Peter, from the International Law Commission, presented a critique of Corporate Social Responsibility (CSR).  He opined that it was the wrong path for getting women out of poverty as it served the economic interests of corporations, often at the expense of the interests of local women.  In question time he engaged in an important conversation about the real obligation for corporations wanting to demonstrate social responsibility – to pay tax in the foreign countries in which they do business.

Day two concluded by taking a close look at the relationship between women, work and poverty.  Dr Juliana Masabo from the University of Dar es Salaam opened with a deeply considered paper examining the link between women’s migration and work under the East Africa Community Regime, highlighting how this facially gender neutral protocol in practice poses significant barriers to the experience of women seeking to cross boarders in East Africa for the purpose of work (slides here). Prof Frances Lund, Director of the Social Protection Programme of WIEGO, then gave a fascinating contribution on workers in the informal sector (slides here).  She highlighted that the majority of women working do so informally in sectors that currently fall beyond the reach of legal and social protection.  Accordingly, creative interventions need to be made in order to protect the security of poorer women workers.

Day three commenced with an engaging panel of four speakers who considered the future developments of human rights approaches to women and poverty.  Dr Serges Djoyou Kamaga from the University of South Africa argued that there is an important role for traditional rulers to play in realising women’s rights and gender equality in Africa. Prof Gertrude Fester from the Rwandan Association of University Women and Asikia Ige from the University of Lagos each presented thoughtful accounts of how feminist perspectives and research methods could be applied when considering questions on women’s poverty.  Finally, Prof Shirley Randell gave a paper that looked at the contribution that Rwandan women parliamentarians have provided to development, human rights and democracy.

The final substantive conference panel brought together three very strong presentations on the challenges posed to women’s rights in the context of customary law.  Dr Sindiso Mnisi Weeks from the University of Cape Town considered the complexities posed to women seeking access to justice under customary law structures.   Prof John Mubangizi from the University of KwaZulu-Natal’s paper looked at the relationship between between culture and human rights and in particular, the causal link between gender based cultural patterns and women’s poverty.  Finally, Tabeth Masengu from the University of Cape Town urged the audience to see the human face behind the headlines of litigation in her thoughtful account of the lessons that can be learnt from the Botswana case of Ramantele v Mmusi.

Day two and three of 'Women and Poverty: A Human Rights Approach' continued to build upon the success of day one. ...

Today on the OxHRH Blog we are delighted to present short overview summarising the Opening Ceremony and first ...

Rwanda, Gender, Right to Equality and Non-Discrimination, Socio-Economic Rights
Today on the OxHRH Blog we are delighted to present short overview summarising the Opening Ceremony and first ...