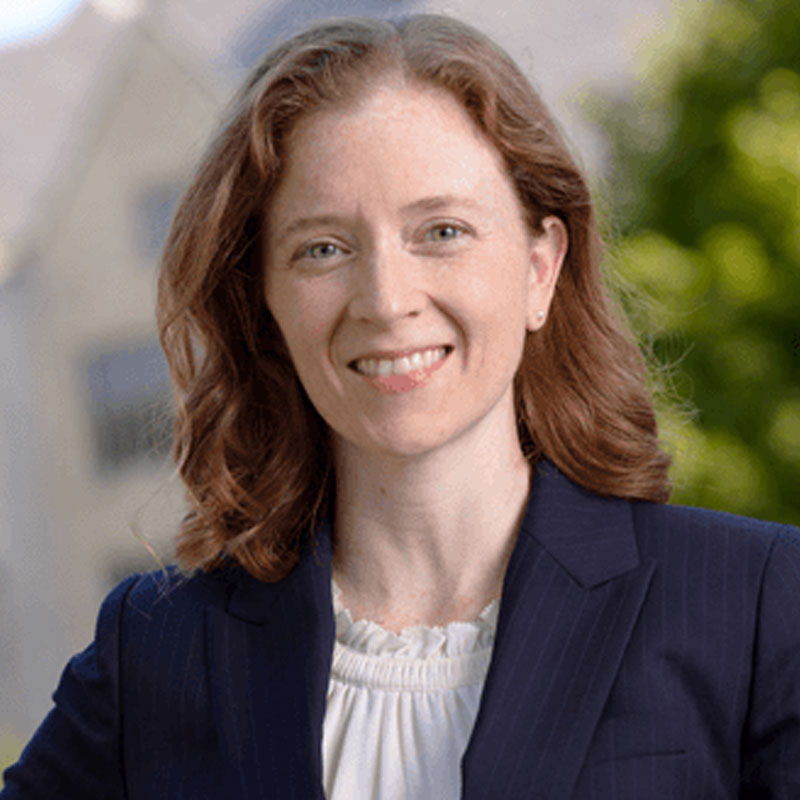 Elizabeth Y. McCuskey is Associate Professor of Law and Co-Director of the JD/MD and JD/MPH programs at the University of Toledo, where she teaches health law and civil procedure courses. Her research focuses on health law's federalism dimensions and courts' role in implementing health policy.

The debate over the government’s role in health care is not a new one, nor is the existential crisis that surrounds it.  On March 23, 2010, President Obama signed the Affordable Care Act (ACA), the culmination of years of both widespread public support for health reform and vigorous disagreement over what form reform should take.  Despite its ubiquity, public understanding of the ACA remains low.  Now a new Congress and new President have vowed to repeal and replace the ACA.  The ACA’s seventh birthday, during a time of renewed upheaval, seems a fitting moment to revisit the crises that prompted the ACA and the fragility of the system it reformed.

Access to health care in America depends largely on a person’s ability to pay for that care from a patchwork of different funding sources, most of them private health insurance.  Rising health care prices meant that paying entirely out-of-pocket for health care quickly became impossible for nearly everyone.  Health care spending had accelerated over the prior three decades to consume 18% of GDP, draining the economy while producing less favorable health outcomes than in countries which spent only half as much.  The burden of these outsized health care expenditures laid most heavily on those who could ill afford it:  the uninsured and underinsured.  Medical bills bankrupted families, sometimes even if they had health insurance.

As health care became even more expensive, so did the health insurance used to pay for it.  Insurance companies used “medical underwriting” to vary the premium of individual commercial policies based on an individual’s health.  Inexpensive policies were available to young healthy people without children, who were less likely to need care in the near term and unlikely to purchase insurance even if they could afford it.  But insurance policies were prohibitively expensive for those whose age, disability, or disease predictably required extensive medical care.  This left around 16% of Americans without any health insurance, either because they could not afford it or because they had too little incentive to buy it.  If a person developed a medical condition, insurance companies could later refuse to sell insurance to her, or refuse to cover that condition.

An additional 29 million Americans were underinsured – they had some health coverage, but still had to pay hefty out-of-pocket sums for important medical needs (like childbirth or pre-existing conditions or prescription drugs) or had to pay thousands of dollars out-of-pocket before their insurance would kick in.  If illness, injury, or another serious medical need arose, people without insurance or with skimpy coverage were faced with the tragic choice between continuing care and risking bankruptcy or foregoing care and risking more serious illness, disability, and even death.

On a national scale, uninsurance and underinsurance drove health care spending ever higher as people avoided preventative services and follow-up care due to their cost and lack of urgency.  Without preventative care, the uninsured and underinsured more frequently developed preventable conditions and ended up in hospital emergency departments.  Most hospitals are required by law to provide stabilizing care to anyone with an emergency medical condition, and thus provided emergency care for preventable conditions to many people of limited means.

Hospitals could then seek to collect the cost of emergency care from the patient, which financially ruined many uninsured or underinsured families.  Or hospitals wrote-off the cost of care and recouped some of the lost revenue by increasing the price of care overall, which forced insurers to raise premiums to cover the costs, making insurance even less affordable.  Uninsurance and underinsurance thus served as upward ratchets for health care prices, and particularly for the price of insurance.  Insurance thus became both practically necessary to access care, and yet more expensive than most individuals could afford.

The health insurance picture before the ACA thus looked like this: 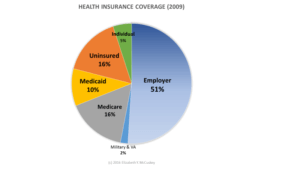 The piecemeal approach to health care coverage left half of Americans with coverage dependent on an employer, about one quarter were covered by government programs (Medicare for the elderly and Medicaid for some low-income folks), expensive and skimpy individual plans for others, and 16% of the population left to pay for care out of their own pockets or forego it.  The high cost of care and inability to pay it drove people into medical bankruptcies.   Loss of a job was doubly penalizing because it meant loss of employer-sponsored health insurance, and loss of the income necessary to pay for an individual policy.  The number of people covered by employer policies had been falling, while the rolls of Medicare and Medicaid rose, along with the number of uninsured.

By 2009, the already thin patchwork of payment-dependent access to care had badly frayed.   Although health care had been the subject of discrete reform efforts over the preceding decades, the piecemeal approach left significant gaps in access and had failed to abate costs.  The issue of health care reform featured prominently in the 2008 election.  The momentum for reform catalyzed the Patient Protection and Affordable Care Act of 2010, the first effort to bring reform to all the sources of health care payment simultaneously.

This is Part 1 of a three part series on healthcare in the USA. Parts 2 and 3 will be on the Blog tomorrow and Wednesday respectively.