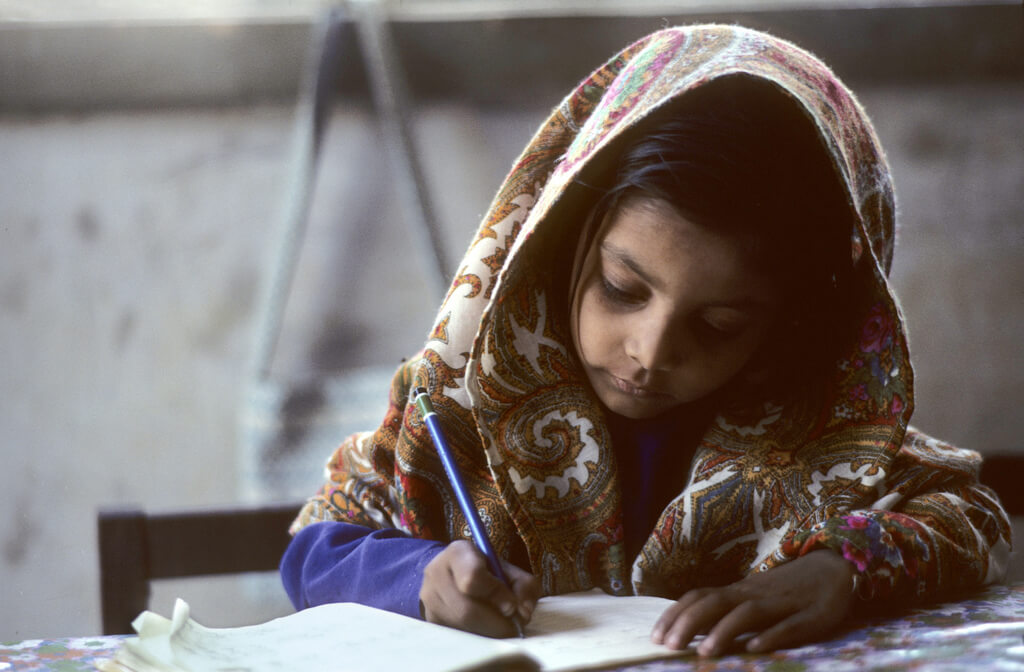 A young girl does her school work in Karachi, Pakistan.

Girls with Books, Better Laws, Pave the Way Ahead

In Nigeria just last month, the extremist Boko Haram group deliberately kidnapped more than 270 schoolgirls preparing for exams —possibly selling them into “marriage” as part of a campaign to purge the country of “impure” Islam.  Once again, as UN Secretary General Ban Ki-Moon said of Malala after the Taliban nearly killed her for her activism on behalf of girls’ education, a brazen attack has shown what frightens extremists most: a girl with a book.

But while the attack on Malala and kidnapping in Nigeria rightly sparked an international outcry, women and girls from Pakistan to Papua New Guinea, Tunisia to Turkmenistan, endure pervasive violence, inequality, and bias that go largely unremarked, mostly unreported, and overwhelmingly ignored—around the world, ever hour of every day.

Appalling violations of their most basic human rights both reflect and reinforce discriminatory laws and powerful social norms, which together tell women and girls they are less entitled to health and hope, education and autonomy, freedom from violence and fear, than their fathers, husbands, brothers, and sons.

This major breach of human rights also carries enormous costs for development.  We have estimated that the costs of domestic violence — solely in terms of lost incomes and reduced productivity — amount to about as much as what most governments spend on primary education.

The World Bank Group this week launches a new report showing that systematic disparities in voice and agency persist, affecting hundreds of millions of girls and women around the world. Voice and Agency: Empowering Women and Girls for Shared Prosperity focuses on several key areas: freedom from violence, sexual and reproductive health and rights, ownership of land and housing, and voice and collective action. It explores the power of social norms in dictating how men and women can and cannot behave, and what works to achieve change.

Here we are talking about  girls and women who have no say whether, when and how many children to have, who cannot buy or inherit land, who have no say in major decisions at home and in their community, who cannot leave when their husbands beat them, who cannot ensure that their daughters attend school rather than being married off as children.

Our report distills vast data and hundreds of studies to shed new light on constraints facing women and girls worldwide, from epidemic levels of gender-based violence to laws and norms that prevent them from owning property, working, and making decisions about their own lives. It argues that expanding women’s agency—their ability to make decisions and take advantage of opportunities—is vital to improving their lives as well as the world we all share.

We present powerful new sets of results showing the powerful links between women’s agency and their education. We also highlight the power of laws—for better or worse—to shape gender norms and the lives of women and girls locally and globally.

Governments clearly have a powerful role in ending legal discrimination: Well into the 21st century, some 128 countries maintain legal barriers to women in such basic areas of life as obtaining official ID cards, owning property, and getting a job.  In 28 countries, mainly in the Middle East and North Africa and South Asia, more than 10 such discriminatory laws are on the books. But change does happen.  The number of countries recognizing domestic violence as a crime has risen from close to zero to 76 in less than four decades. We present new analysis that shows that the longer the legislation is in place, the lower the tolerance of violence.

Expanding opportunities and amplifying the voices of women and girls isn’t a zero-sum game.  Leveling the playing field for women and girls brings broad development dividends for men and boys, families, communities, and societies.  The data and evidence are clear.

Ensuring that women and men, boys and girls, all have the opportunity to fulfill their potential and author their own lives is vital if we are to create more resilient, more prosperous world.

And while there’s no magic formula for getting there, sending more girls to quality schools, keeping them there, and passing progressive laws go a long way.