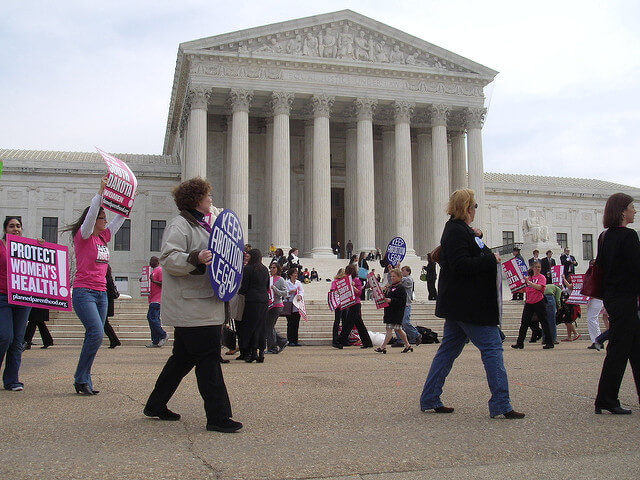 Not only did Scalia vote in favor of every restriction on reproductive rights that he ever had the opportunity to review, he also consistently ruled in favour of anti-abortion protestors in reproductive health care facility access cases before the Court (Image credit: vaxciliate via Flickr).

Throughout the three decades that Justice Antonin Scalia served on the United States Supreme Court, he was invariably viewed as one of the Court’s staunchest opponents of sex equality and reproductive rights. As constitutional law scholar Erwin Chemerinsky recently summarised, “[n]o justice in recent decades has had a worse record on women’s issues than Antonin Scalia.” In a recent article, The Guardian described Scalia as “extreme and out of step with women” and “decidedly anti-progressive,” explaining that he “wanted to overturn Roe v. Wade, voted against protecting equal pay, wanted states to be able to outlaw gay sex, and sometimes said things outside of the courtroom about these issues that raised eyebrows.”

In fact, in a 2011 extra-judicial interview Scalia boldly proclaimed that the U.S. Constitution does not prohibit sex discrimination:

“Certainly the Constitution does not require discrimination on the basis of sex. The only issue is whether it prohibits it. It doesn’t. Nobody ever thought that that’s what it meant. Nobody ever voted for that. If the current society wants to outlaw discrimination by sex, they we have things called legislatures, and they enact things called laws.”

Scalia’s archaic position regarding women’s constitutional rights—or lack thereof—surprised no one by 2011.  Five years earlier, he had provided the singular vote in favour of permitting the Virginia Military Institute—a state-funded institution—to continue denying women admission based on his “interpretation” of the Equal Protection Clause.

Interestingly, Justice Scalia refused to share his opinion on reproductive rights or explain whether he believed Roe v. Wade was a “strong precedent [that should be upheld] or a weak precedent [that ought to be overruled]” during his confirmation hearing in 1986.  In a futile attempt to ascertain Scalia’s position on reproductive rights, Senator Ted Kennedy posited: “[Y]ou are not prepared to indicate . . . in the Roe v. Wade case, where you come out, as to whether you feel that that is a strong precedent or a weak precedent. But evidently you believe that some precedents are weaker and some are stronger in the doctrine of stare decisis.” The Justice responded: “That is right, sir. And nobody arguing that case before me should think that he is arguing to somebody who has his mind made up either way.”

By the time Scalia penned his partial dissent in Planned Parenthood v. Casey, however, he had certainly made up his mind, succinctly concluding, “Roe was plainly wrong” and should be overruled because the Constitution contains no right to abortion. Indeed, when the Court struck down Nebraska’s ban on “partial birth abortion” in Stenberg v. Carhart, Justice Scalia in his dissent opined that “one day” the majority’s decision “will be assigned its rightful place in the history of this Court’s jurisprudence beside Korematsu and Dred Scott.” Not only did Scalia vote in favor of every restriction on reproductive rights that he ever had the opportunity to review, he also consistently ruled in favour of anti-abortion protestors in reproductive health care facility access cases before the Court.

Most recently, in Burwell v. Hobby Lobby Stores, Justice Scalia provided the critical fifth vote to an all-male majority, which struck down the Accountable Care Act’s requirement that employers provide contraceptive coverage to women on the theory that the coverage mandate unduly burdened for-profit corporations’ right to exercise their religious liberty.  As various amici pointed out to the Court, Congress’ intent in enacting the contraceptive coverage provision at issue was to help alleviate the “punitive practices of insurance companies that charge women more and give [them] less in a benefit” and to “end the punitive practices of the private insurance companies in their gender discrimination.”