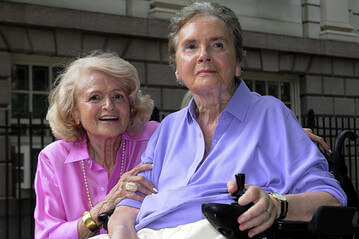 Edith Windsor and her partner of 44 years, Thea Spyer who passed away in 2009.

US Supreme Court grants certiorari in Windsor v United States – what comes next?

Following on from his previous post considering the recent US Second Circuit Court of Appeal decision to widen the category of ‘suspect class’ to include the protection of same-sex rights, Karl Laird follows the legal progress of this case and offers some context for what is now set to be a landmark US Constitutional decision.

At their conference on 7th December, the justices of the US Supreme Court granted certiorari in Windsor v United States.  There are a number of options open to the Court as to how it might dispose of the case.  In their order agreeing to hear the appeal, the justices themselves opened up another avenue down which the case might go, one that would not require them to decide the substantive issue of whether DOMA violates the Fifth Amendment.  The Court has extended the issues for review to include the question of whether the interveners have standing to bring the case under Article III of the Constitution.

This issue arises because in February 2011 President Obama directed the US Department of Justice to cease defending the constitutionality of DOMA.  This led the Bipartisan Legal Advisory Group of the House of Representatives to instruct private counsel to defend DOMA’s constitutionality.  The Court could avoid the substantive issue of whether DOMA violates the equal protection clause by disposing of the case on procedural grounds, however commentators have stated that this is unlikely to occur.

Another option open to the Court is to adopt the reasoning of the Second Circuit in its entirety and to hold that gays and lesbians form a quasi-suspect class and thus invalidate DOMA on the ground that it fails to withstand heightened scrutiny review.  This option, however, raises two distinct issues.  Firstly, the most important justice in controversial cases of this nature is Justice Anthony M. Kennedy.  Justice Kennedy was the author of the two previous opinions in which the Court invalidated provisions as violating the rights of gays and lesbians.  However in both cases Justice Kennedy decided the cases in such a way as to avoid articulating the requisite standard to which provisions which impact on the rights of gays and lesbians ought to be subject.  This same reluctance might manifest itself in Windsor.

A second issue is what Michael J. Klarman has termed ‘backlash’, which occurs when courts intervene to defend a minority position or to resolve a social issue that evenly divides a country down the middle.  Such decisions have the potential to generate political backlash.  Gay and lesbian rights advocates have made significant progress in the past few years politically, for example citizens in Washington State recently voted in a referendum to approve a legislative provision providing for same sex marriage.  The argument is that these political gains could be negated should the Court invalidate DOMA and thus generate a political backlash that could in fact impede the goal of gay and lesbian equality by fomenting fervent political opposition.

A third option available to the Court is to follow the reasoning of a case in the First Circuit Court of Appeals, which held that because DOMA legislates in an area typically reserved to the states (i.e marriage), it was subject to closer than usual scrutiny and was not to be given the degree of deference typically afforded to congressional legislation.  In invalidating DOMA without resorting to heightened scrutiny, the First Circuit held that, ‘[g]iven that DOMA intrudes broadly into an area of traditional state regulation, a closer examination of the justifications that would prevent DOMA from violating equal protection (and thus from exceeding federal authority) is uniquely reinforced by federalism concerns.’  Such reasoning is attractive as it would arguably appeal to both the liberal and the conservative sides of the Court and also has the benefit of avoiding the political backlash that might occur should gays and lesbians be held to constitute a quasi suspect class.

Of course another potential outcome is that DOMA will be upheld in its entirety.  Whether this occurs largely depends upon Justice Kennedy and there will be much speculation from now until the case is heard in March as to what way his vote is likely to go.  Irrespective of the outcome, the case is likely to generate considerable controversy.

Karl is a Lecturer in Law at Pembroke College, Oxford.

Is it Time for the US Supreme Court to Come Out of the Closet?

United States of America, Right to Equality and Non-Discrimination, Sexual Orientation, Standard of Review
In a follow-up post to his previous analysis of Windsor v. United States, Karl Laird examines which constitutional ...

Could the outcome in Windsor v US be a hollow victory?

United States of America, Right to Equality and Non-Discrimination, Sexual Orientation, Standard of Review
By Karl Laird In an important judgment, Windsor v United States the Court of Appeals for the Second Circuit ...