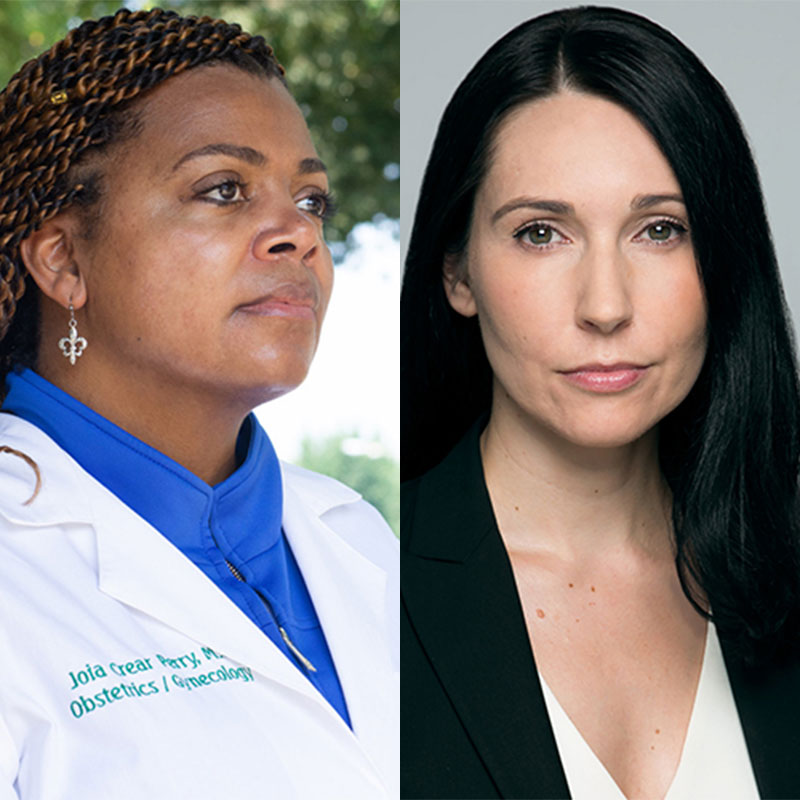 Joia Adele Crear-Perry, MD, FACOG – a thought leader around racism as a root cause of health inequities, Speaker, Trainer, Advocate, Policy Expert, and fighter for justice – is the Founder and President of the National Birth Equity Collaborative. She addressed the United Nations Office of the High Commissioner for Human Rights to urge a human rights framework to improve maternal mortality. Previously, she served as the Executive Director of the Birthing Project, Director of Women’s and Children’s Services at Jefferson Community Healthcare Center and as the Director of Clinical Services for the City of New Orleans Health Department where she was responsible for four facilities that provided health care for the homeless, pediatric, WIC, and gynecologic services within the New Orleans clinical service area. Dr. Crear-Perry has been celebrated for her work to improve the availability and utilization of affordable health care for New Orleans’ citizens post the Hurricane Katrina disaster of 2005. Currently, her focus has expanded nationally and internationally as it relates to Maternal and Child Health.

Two months after George Floyd was murdered by a white police officer in Minneapolis, Minnesota, protests continue across the United States (U.S.). From large urban cities to small rural towns, Black people are demanding justice for George Floyd and an end to the impunity that allows police officers to routinely destroy Black lives. Many of the activists leading this human rights movement are Black women, whose own needs and gendered experiences with oppression are often minimized or disregarded.

Facing state-sanctioned violence and the U.S. government’s failure to protect its Black residents, the families of George Floyd and other Black people killed by police, along with more than 600 civil society groups, sought accountability through the international human rights community. In a letter to the United Nations Human Rights Council, they called for a special session to investigate police violence and repression of protests in the United States.

On June 17, the Human Rights Council began two days of historic “Urgent Debate,” which included a statement from the U.N. Special Rapporteur on Contemporary Forms of Racism, Racial Discrimination, Xenophobia and Related Intolerance, E. Tendayi Achiume, the first woman to serve in the role since the mandate’s origin in 1993. With clarity and precision, Professor Achiume laid out the stakes of the debate and called for both a global thematic investigation and a country-specific intervention.

Speaking truth to power, Professor Achiume used her platform to call out a faltering commitment to anti-racism at the United Nations. She reminded us all that “an important purpose of the UN human rights system and its international mechanisms is to ensure that, where national authorities are unable or unwilling to protect human rights, those subject to violations have some means of recourse.” Professor Achiume intentionally spoke Breonna Taylor’s name, refusing to forget the Black woman in Louisville, Kentucky who was shot to death by police officers in her own home. And she noted that while the focus of the Urgent Debate was law enforcement, “the uprising in the United States and in other parts of the world are rejections of all systemic racism in all areas of life.”

Indeed, systemic racism pervades all areas of Black women’s lives. Black cisgender and transgender women in the U.S. are recurring victims of police violence—including sexual assault— and die from many other preventable causes rooted in government sanctioned discrimination, neglect, and deprivation of economic and social rights. The chronic stress of observing, navigating and experiencing oppression weathers Black women on a cellular level, making them more susceptible to premature death, whether by violence or disease.

Black women and birthing people must face the possibility that they or their children will be killed by state actors and the risk of death and injury bringing those children into the world. Maternal mortality is an indicator of a nation’s commitment to health and equity, and on this measure, the United States has failed. For decades, Black women of all socioeconomic backgrounds have been dying from pregnancy complications at more than three times the rate of white women. The U.S. has the highest maternal mortality ratio among high-resource countries and the government’s own data indicates that the majority of these deaths are preventable.

In hospital settings, where most Black women in the U.S. give birth, racism and sexism can facilitate mistreatment and abuse. Black women report being ignored, disrespected, coerced, threatened, and denied information and the opportunity to give or refuse consent to medical interventions. Evidence shows that repeated exposure to racism has a “weathering” effect that harms Black women’s health and contributes to adverse birth outcomes. As the U.S. reckons with the way police wield authority over Black bodies, that reckoning must also extend to health care institutions where Black women birth, and too often, die.

Black women’s deaths do not garner the attention and collective anguish they deserve. When a Black woman’s human right to life is violated, it is often only other Black women who seek justice in her name. In New York City, Black women birth workers have organized small protests outside the hospitals where two young women recently suffered maternal deaths. In the U.S. Congress, the Black Maternal Health Caucus—led by Black women lawmakers— introduced a package of legislation (“the momnibus”) to improve maternal health. But in Kentucky, Breonna Taylor’s killers have yet to be held accountable. And at the United Nations, the Human Rights Council ended the Urgent Debate by passing a substantially weakened resolution.

Halfway through the International Decade for People of African Descent, Black women in the U.S. are leading movements, resisting oppression, and claiming their human rights to life, health, and an existence free from discrimination. Their human rights should be front and center, but not up for debate.