Amelia is a graduate lawyer at Herbert Smith Freehills Sydney and was formerly a researcher at the Judicial Commission of NSW and 9 Selborne Chambers. She graduated from the University of New South Wales in 2019 with first class Honours in Law and an Arts degree with Distinction. She was also recently appointed a fellow of the Gilbert + Tobin Centre for Public Law.

Professor Tonja Jacobi and Dylan Schweers published a study in 2017 which found that interruption rates in the United States Supreme Court were highly ideological, in that conservative judges interrupted their liberal colleagues more frequently than vice versa. More importantly, the authors found that judicial interactions during oral argument were highly gendered, with women judges being interrupted at ‘disproportionate rates to their male colleagues’.

This study corroborated other investigations which have found that women are interrupted more frequently than men in everyday conversation, as well as in politics and business.

I set out to determine whether these patterns were perpetuated against women at the height of a high-status legal career on the High Court of Australia. My findings, as published in the forthcoming issue of the Melbourne University Law Review, confirmed that even the first female Chief Justice of the Court is not immune from the gendered interruption patterns. I found that overall, women were more likely to be interrupted than their male colleagues, and in a way which hampered their ability to ask meaningful questions of counsel during oral argument.

However, there was a striking difference between the interruption patterns in the US Supreme Court and those in the High Court of Australia. While Jacobi and Schweers found that the predominant interrupters were male judges speaking over their more junior (and progressive) female colleagues, I found that judges – whether male or female – almost never interrupted one another during oral argument. Rather, I found that judges were most frequently interrupted by the advocates appearing before them. The overwhelming majority of these advocates were men (92.5% of all barristers appearing) and they interrupted the female judges at far greater rates than the male judges.

Findings of the empirical study

My study focused on Full Bench (ie, when all seven judges were presiding) hearings in the High Court of Australia between mid-2015 until the end of 2017. Over this period, there were four male judges and three female judges. I recorded each time a judge was interrupted by counsel (which is coded as ‘- – -’ in the transcripts) and verified this against the available AV recordings where it was unclear from the transcripts whether an interruption had occurred.

I found that in the 2015–16 period, the three female judges received 52% of the total number of interruptions, whereas the four male judges collectively received 48%.

When the Court was presided over by its first female Chief Justice, Susan Kiefel, in 2017, I found that these rates increased, as the three female judges received 69% of the total interruptions, whereas their four male counterparts received only 31%.

More concerningly, I found that women were more likely to be interrupted in a pre-emptive manner which cut off their ability to ask substantive questions, whereas men were interrupted less but also in an affirmatory way – ie, “yes your Honour”.

The breakdown of these interruption rates as experienced by each judge is represented in Figures 1 and 2, which were produced by the Melbourne University Law Review. 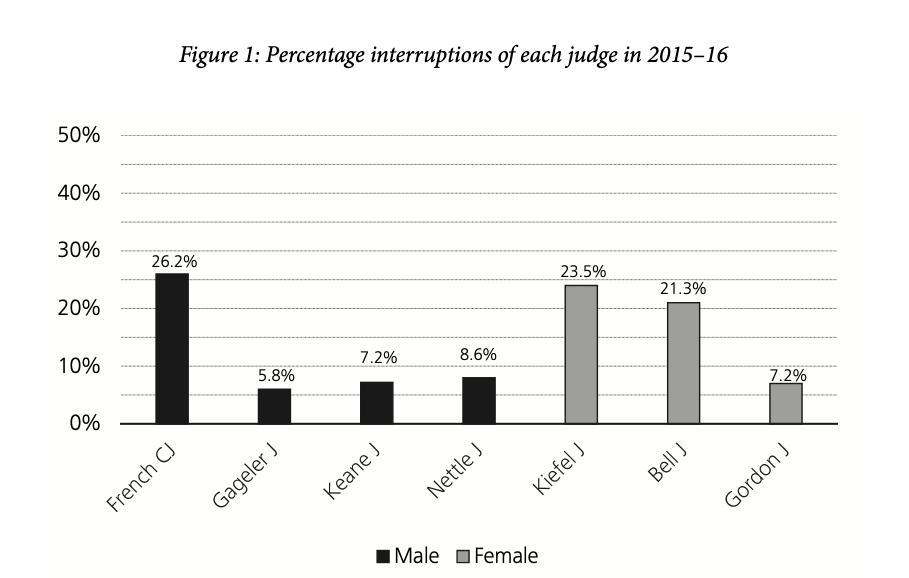 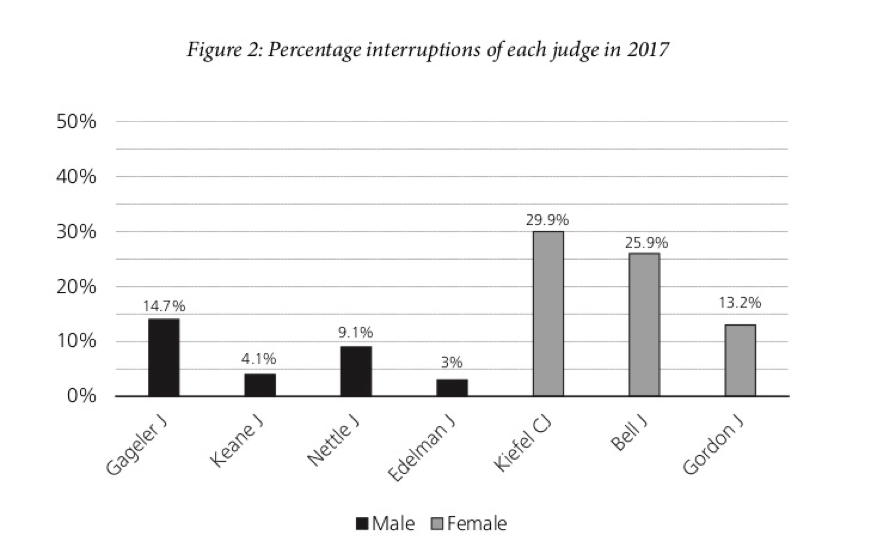 Although the issue of conversational interruption might not seem like a major problem, my study and Jacobi and Schweers’s in the US context draw attention to important outstanding issues for the substantive equality of women in judicial institutions. The fact that women were interrupted more frequently and in a manner which disadvantaged their participation during oral argument suggests that the mere presence of women is not enough to challenge underlying gendered norms regarding the authoritative male judge archetype. This challenges the common assumption, seen in UN gender development goals, that women will transform patriarchal institutions once they reach a ‘critical mass’ of 30% representation. Instead, my study suggests that more work needs to be done in tackling underlying unconscious biases as to conversational norms and judicial authority before gender equality in male-dominated institutions can be achieved.

When does a person have an intellectual disability? The insights of the US Supreme Court

United States of America, Disability
A death sentence against a convict with an intellectual disability (ID) would violate the Eighth Amendment’s ...

United States of America, Death Penalty
Last week, the US Supreme Court spared the life of Vernon Madison, at least temporarily, by remanding his case ...