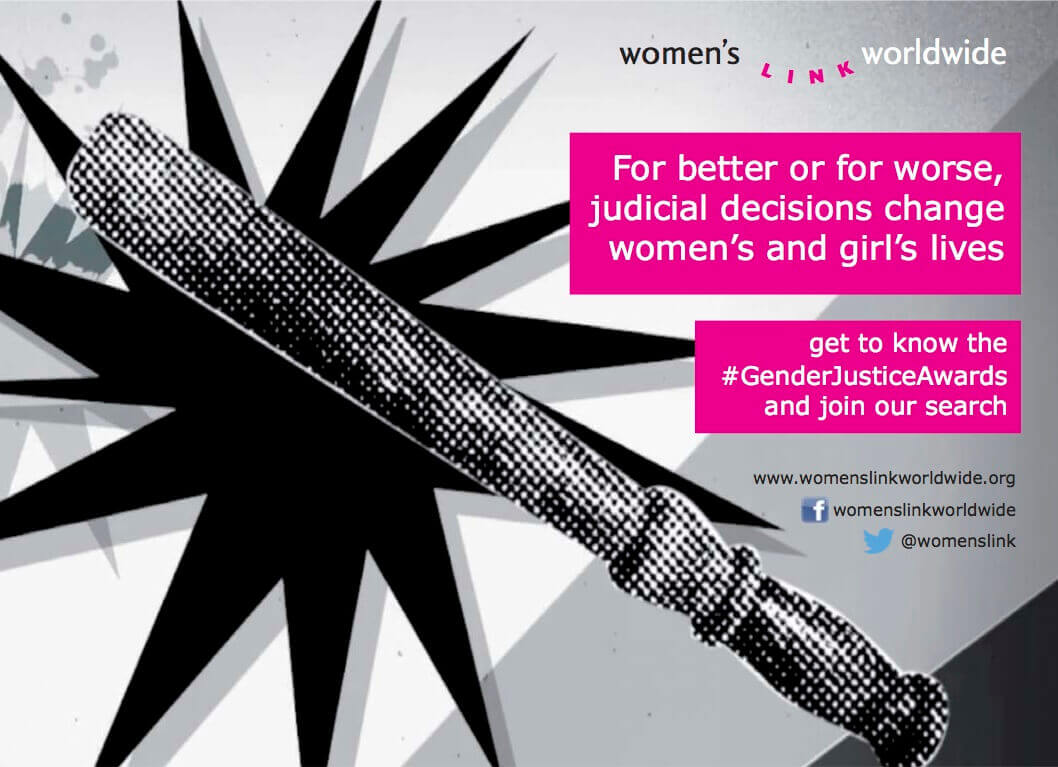 International Women’s Day: Women and Girls Struggle for Equality in the Courts

What better time than International Women’s Day to embolden citizens to exercise their power over the judicial process? The Gender Justice Uncovered Awards provide a vehicle for the public to be vigilant with the justice system by holding judges accountable for their decisions.

What started as a call from women to end workplace discrimination has grown into a global movement to address inequality, violence and discrimination against women and girls. Every 8th of March on International Women’s Day we ask political leaders to address these issues, but rarely do we make the same appeal to judges. What better time than International Women’s Day to embolden citizens to exercise their power over the judicial process? The Gender Justice Uncovered Awards provide a vehicle for the public to be vigilant with the justice system by holding judges accountable for their decisions.

A few weeks ago, I wrote about Bludgeon nominees, judicial decisions where judges relied on stereotypes and prejudice failing to uphold the human rights of women and girls.  This post highlights Gavel nominees: influential examples of the judicial process as a space for promoting human rights. Gavel awards praise the work of those committed judges who lay out a clear framework for advancement of human rights, creating a path for others to follow.

Some victories come at the expense of irreparable loss. In Spain courts failed to protect a seven-year-old girl when they allowed her father unsupervised visitation, despite his history of gender violence against women. Her mother Ángela implored the court to order supervised visits, filing over thirty complaints until tragically, on April 24, 2003, the girl’s father murdered her during a visit, unsupervised. Following a 12-year court battle, the CEDAW Committee condemned Spain in 2014 for relying on negative stereotypes to diminish the seriousness of domestic violence. The Committee called for training to eliminate such stereotypes and demanded the State always consider gender-based violence in child custody and visitation proceedings. Currently, Spain is charged with implementing the Committee´s recommendations, a phase where the political will to prioritize the elimination is essential to the process and which presents an opportunity for the State to demonstrate it’s commitment to combat this type of violence.

After fifteen years, a Colombian court held the military accountable after two active-duty soldiers raped a woman in 1999. When the woman first came forward, the Court denied the military’s responsibility holding that the soldiers’ conduct was not related to their military service. Only after a new court visibilized the systemic use of violence against women as a tactic of war, the representations of masculinity and femininity that armed groups instill in its members, and the ways women are targeted during conflict, could the court properly hold the Army responsible.  It required the military mandate training and implement guidelines to prevent, investigate and punish violence against women.

The struggle for workplace equality continues in Argentina as an applicant was refused employment as a bus driver specifically because she was a woman. A decision in the case by an appeal court was first nominated for a Gavel Award in 2010 because it called for an end to gender-based discrimination.  The case later reached the Supreme Court, which has affirmed women, indeed, have a right to choose their profession free from discrimination.

In Botswana, where the penal code criminalizes consensual same-sex sexual conduct, the High Court ruled that the State must afford LGBT rights organization LEGABIBO state-registration. The High Court guaranteed that Constitutional protections apply to all individuals and affirmed that the criminal statute involving sexual conduct criminalizes behavior, not attraction. The Court praised the objectives of the organization for promoting good values such as self-reliance, non-discrimination, health, and education. Fortifying the importance of allowing debate and advocacy, the judge stated that in a democratic society asking for a law to be changed, such as the one criminalizing same sex activity, is not a crime or incompatible with peace, welfare and good order.  The Court’s affirmation that the organization does not offend morality sets out a critical discourse in the face of sweeping criminalization of speech, assembly and other rights of perceived same-sex attraction around the world.

Judges continue to issue both positive and negative decisions related to gender equality. Today, we invite you to celebrate the visionaries working to create a better future free from violence and discrimination in order to demonstrate that courts have the power to defend the rights of women and girls. We celebrate on this day seeing there is more to do and knowing we have the power to act. The nomination period for the Gender Justice Uncovered Awards goes until April 30th, 2015 and voting is open from May 11th to May 31st. We invite you to join the cause with your nominations, comments and action on social media.

Girls with Books, Better Laws, Pave the Way Ahead

Children's Rights, Gender, Right to Equality and Non-Discrimination
“The extremists are afraid of books and pens. The power of education frightens them,” Pakistan's teenage activist ...