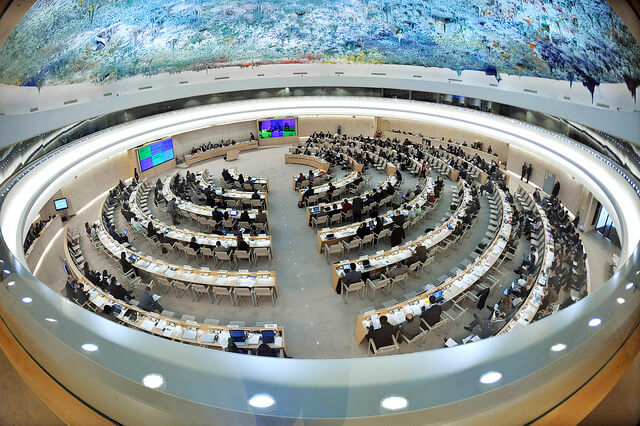 A general view of participants at the 16th session of the Human Rights Council in Geneva, Switzerland.

In recent years at the United Nation’s Human Right’s Council (UNHRC) an ideological challenge has been directed against the universality of international human rights by a strong religious lobby. Religions themselves have, in the human rights era, self-identified as the core of resistance to universal human rights and, in particular, to women’s right to equality in the family.

In 2011, following on Resolution 12/21 in 2009, a majority of the member states of the UNHRC passed Resolution 16/3, calling for reinterpretation of human rights in accordance with traditional values and setting up an Advisory Committee to make recommendations to the Council. These resolutions were proposed by Russia and the Organisation of the Islamic Conference and strongly criticised by Special Procedures mandate holders, Treaty Bodies and the Office of the High Commissioner for Human Rights, as undermining women’s right to equality. This call to apply a regressive interpretation to the human rights regime was preempted by the Advisory Committee, which asserted that “…. the distinctive features of different cultures and religions should be accorded respect, so long as these are consistent with international human rights standards.” (para 80). Responding to the study, the International Commission of Jurists and the International Service for Human Rights issued a statement: “We believe that emphasising traditional values could lead to undermining the universality of human rights. International human rights law must take primacy over traditional values, and not the other way around.

In 2014, the UNHRC passed Resolution 26/11 on the protection of the family, “reaffirming that the family is the natural and fundamental group unit of society and is entitled to protection by society and the State […]”. As previously discussed on the Blog, the Council omitted to incorporate the crucial 20th century gain of women’s right to equality within families. In reaction, the Coordinating Committee of UNHRC Special Procedures called on the Council to ensure that in all future resolutions on the family, the right to equality between women and men, as well as between girls and boys, within the family must be explicitly included.

In June 2015, the Resolution on the protection of the family was again raised in the Council and, only after heated debate amongst member states, was a mention of women’s equality in the family included in paragraph 9: “recognizing that equality between women and men and respect for all the human rights and fundamental freedoms of all family members are essential to family well-being and to society at large”. However, this fell far short of the reassertion of the right to equality for women in all aspects of family life and the expert Working Group on Discrimination against Women (WGDAW) and other Special Procedures mandate holders expressed concern “that this provision falls short of requiring States to respect, protect and fulfil women’s and girls’ fundamental human right to equality in the family”.

In the same session in 2015, the UNHRC adopted Resolution 29/4 noting the Report of WGDAW on the theme of cultural and family life. On the basis of that Report but with a marked tendency to weaken its recommendations, the Council called upon states to promote “the equal and full access, participation and contribution of women and girls in all aspects of life, including in cultural and family life”. The Council did not adopt the call of WGDAW to enshrine in constitutions and laws (whether in secular, plural or religious family law systems) women’s right to equality, which should apply in all areas of life and have primacy over all religious, customary and indigenous laws, norms, codes and rules; its call for elimination of early, forced, polygamous and temporary marriages; or its call to eliminate laws that condone the patriarchal oppression of women in families, such as laws that exclude marital rape from the crime of rape or that criminalise adultery. While adopting the CEDAW provision on equality for both spouses in all aspects of ownership and management of property, it did not adopt the WGDAW’s detailed recommendations regarding the family as an economic unit, which, citing CEDAW GR 29, call inter alia for equal division of family property in the event of divorce or widowhood and equality for women and girls in inheritance rights.

The discrepancy between the two Resolutions of the UNHRC, adopted in the same session, is a reflection of the volatility of the Council on this issue of traditionalism versus modernity, which is at the core of the ideological challenge to women’s human rights in general and in the family in particular. The confrontation between the Council and its own independent human rights experts regarding this conflict represents a remarkable illustration of the chasm between political compromise allowing states to opt for religious patriarchy and human rights understanding that women’s right to equality in the family is universal.

United Nations, Gender, Right to Equality and Non-Discrimination
On 23 June 2014, the Human Rights Council decided, through its resolution 26/11, to convene a panel discussion on ...