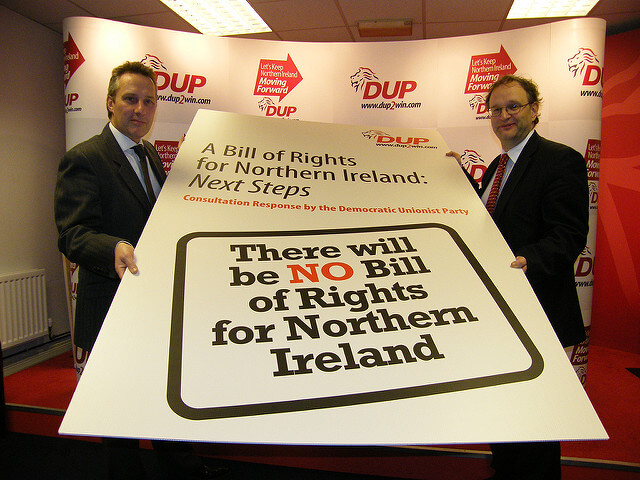 As talks between the Conservative Party and the Democratic Unionist Party (DUP) continue in the UK, the DUP’s positions on human rights are of general interest. Photo credit: DUP Photos via Flickr. Used under a creative commons license https://creativecommons.org/licenses/by-sa/3.0/deed.en

As talks between the Conservative Party and the Democratic Unionist Party (DUP) continue in the UK, the DUP’s positions on human rights are of general interest. Although the Conservative Party manifesto committed to maintaining the Human Rights Act 1998 and membership of the European Convention on Human Rights for the life of the next Parliament, the PM’s announcement that she would tear up human rights law if needed to counter terrorism came too close to election day to properly assess its impact (if any) on that commitment. However, rather than focus on the future of the HRA here, I want to highlight three issues around the DUP and human rights: reproductive rights, LGBTQI+ rights, and dealing with the past.

The Abortion Act 1967 was never extended to Northern Ireland. Health powers were devolved in 1998, and criminal justice and policing powers in 2010. Thus, since 2010 the question of the future availability of abortion in Northern Ireland has been one for Stormont rather than Westminster.

As it stands, abortion is a criminal offence in Northern Ireland, and this is not a merely academic observation. Even now people are undergoing criminal proceedings for violation of the Offences against the Person Act 1861, and on International Women’s Day this year the PSNI raided premises searching for illegally imported abortion pills. Even after a finding in the High Court of Northern Ireland that the hyper-restrictive regime was incompatible with the ECHR, and in advance of a decision from the UK Supreme Court this week on whether pregnant persons in Northern Ireland are entitled to NHS-funded abortions in the rest of the UK, the DUP has remained resolute in its refusal to countenance the liberalisation of abortion law. When she became First Minister, Arlene Foster assured her party that she would resist any extension of the 1967 Act to Northern Ireland.

Northern Ireland is now the only place in the so-called ‘British Isles’ where same-sex marriage is not available. Even though there is significant popular support for marriage equality, the DUP continues to use what is known as the ‘petition of concern’ to block marriage equality in the Northern Ireland Assembly. The petition of concern is a veto that can triggered by a notice signed by at least 30 members of the Northern Ireland Assembly. Foster has defended the party’s use of the petition of concern in relation to marriage equality, saying that her party is not homophobic but merely wishes to ‘defend’ the ‘traditional’ definition of marriage. She has similarly criticized the Equality Commission’s involvement in the so-called ‘gay cake’ case, framing it as a matter of how the Commission engages with ‘faith communities’; other DUP members were also critical. However, in spite of these statements members of the DUP have made controversial remarks in the past, including the (DUP’s) Jim Wells, then NI Health Minister, who claimed that gay parents were more likely to abuse or neglect their children than opposite-se parents.

Dealing with the Past

Dealing with the past is one of the most difficult human rights issues in Northern Ireland. This relates not only to finding mechanisms for addressing allegations of abuse and ill-treatment in individual cases, but also ways of managing the commemoration, remembrance, and contestation of the past. Northern Ireland has a complex framework for managing this, including the Parades Commission, the Joint Protocol in Relation to the Display of Flags in Public Areas, and the provisions of the Stormont House Agreement (2014). The DUP’s history (as with many, if not most, constellations in Northern Irish politics) is entangled with this past, and Arlene Foster has been criticized for failing to condemn loyalist violence, and the Loyalist Communities Council (representing paramilitary groups) officially endorsed DUP candidates in recent elections, and many DUP members and supporters endorse the abolition of the Parades Commission.