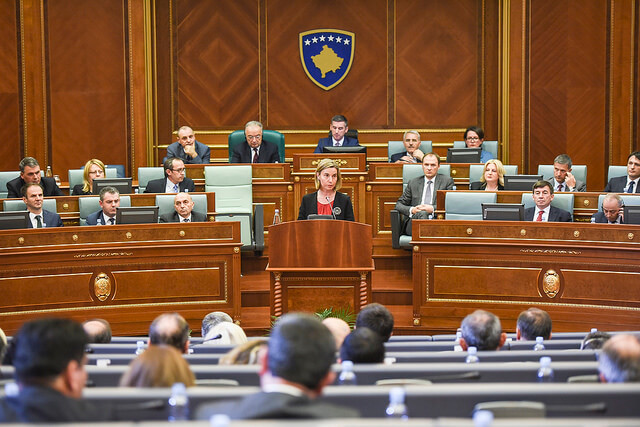 Article 64 of Kosovo’s Constitution defines the composition of the parliament, and out of 120 seats, guarantees 10 seats to Serbs as the largest minority group and another 10 seats to each of the Bosniaks, Turks, Romas, Ashkali, Egyptians and Gorani. Image Credit: European External Action Service, via Flickr used under a creative commons license available at https://creativecommons.org/licenses/by/2.0/

Dzemal Calakovic holds a BS degree in International Relations from the LSE and is currently enrolled in postgraduate studies in Laws with Specialization in Human Rights, with the Queen Mary UoL. He is holding the post of the National Programme Officer in OSCE. His blogs are personal.

The post-conflict southeastern part of Europe demands a more vigorous respect for minority rights, in order to preserve the fragile peace and guard against the horrors of the recent wars in the Balkans. Kosovo has a diverse demographic composition; mainly consisting of Albanians and Serbs who represent the two largest ethnic groups. According to the 1991 census, Montenegrins and Croatians accounted for (respectively) 20,000 and 8,000 inhabitants in Kosovo, out of an estimated 2 million. The 2011 census, however, did not recognize the Montenegrins and Croatians as separate minority groups, thus portraying Kosovo’s society as less diverse than it really is. While the 2011 census did not allow the members of these two communities to indicate their own ethnic identity, the residents who expressed their “other” ethnic heritage was 2,352, which still indicates quite a drastic change from the 1991 data.  The apparent disappearance of Montenegrin and Croatian ethnic identities from Kosovo is mainly a consequence of poor protection of minority rights, stemming from a failure to extend to these groups the rights of constitutionally recognized minority groups, which were accorded to other minorities under the constitution.

First, the two minority groups and their members do not enjoy equal political rights to other groups. Article 64 of Kosovo’s Constitution defines the composition of the parliament, and out of 120 seats, guarantees 10 seats to Serbs as the largest minority group and another 10 seats to each of the Bosniaks, Turks, Romas, Ashkali, Egyptians and Gorani. The exclusion of Montenegrins and Croatians constitutes an outright violation of the rights stipulated in the Framework Convention for the Protection of National Minorities (FNMC) and the International Covenant on Civil and Political Rights (ICCPR). Both international treaties are recognized in the Constitution as directly applicable, and  “in the case of conflict, have priority over provisions of laws and other acts of public institutions” (Article 22).

For members of these minority groups, it has become prudent or even existentially important to hide under the shroud of assimilated group identities that are already constitutionally recognized. For example, when applying for public posts, members of Montenegrin and Croatian communities tend to declare themselves as Kosovo Serbs or Bosniaks, in order to boost their employment chances. This leads to an erosion of their national identities and overlooks the need to strengthen peace and security by protecting minority rights. The introduction in 1998 of the FCNM multilateral treaty came after the conflicts in the Balkans and Rwanda, involving persecution of ethnic, racial and religious minority groups, showed that the oppression of minority groups is likely to ignite political conflicts. Minority rights are moreover deeply entrenched at the international level, through the UN and the OSCE Copenhagen document (paragraph 30).

The solution to the problem of minority oppression requires an amendment to the Constitution of Kosovo. Notwithstanding the continued pledges of Kosovan politicians to rectify the situation, there is a lack of political will and an absence of advocacy efforts to promote this initiative, including on behalf of the international community. An amendment to the Constitution requires 2/3rds of votes of the parliament and 2/3rds of votes from minority members, which is a challenging threshold. One thing is clear, however: any prolonged delay in the recognition of minority groups may inflict irreparable damage to these communities.