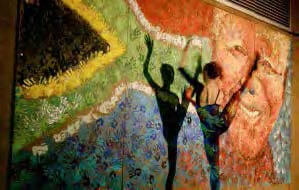 “I pay tribute to the mothers and wives and sisters of our nation. You are the rock-hard foundation of our struggle.” – Nelson Mandela, February 1990

Nelson Mandela spoke these words upon his release from Robben Island on 11 February 1990, after serving twenty-seven years as a political prisoner. Fueled by an uncompromising vision for a free and democratic society, Nelson Mandela altered the course of his prearranged future by becoming something leaders of Apartheid never thought possible. By doing so, he shattered the structures of systematic discrimination and methodical oppression, altering not only his own fate, but the fate of generations to come. Driven by the steadfast conviction that all people are created equal, Mandela’s untamed spirit and progressive ideals transcended the racial, religious, political barriers dividing his country’s people and created the foundation for the New South Africa.

Twenty-three years have passed since Mandela’s legendary speech in Cape Town, but his homeland has fallen short on its promise of “Mandela’s Days”. Today, women in South Africa experience the highest rates of gender-based violence in the world. Here, a girl is more likely to get raped than to learn how to read. Despite comprehensive legislation to combat gender-based violence and to provide extensive protections for victims, women in this country continue to endure alarming levels of violence in spite of legal reforms. The United Nations Committee on the Elimination of All Forms of Discrimination Against Women has even stated that violence against women in South Africa appears to be “socially normalized, legitimized, and accompanied by a culture of silence and impunity.”

The South Africa we live in today is not the one Madiba envisioned for the mothers, wives, sisters, and daughters of this great nation. It has not become a manifestation of the dream he had for the future, the one he crafted while isolated within the confines of a prison cell seven kilometers off the coast of his homeland. It is not a reflection of the pledge we took alongside the Father of our Nation when we promised that “never, never and never again shall it be that this beautiful land will again experience the oppression of one by another.”

But it can be.

It will require us to be more like him… Why?

Because his life is the roadmap to our own freedom… We just have to follow it.

Kelly Stone is a pro-bono attorney at the Women’s Legal Centre in Cape Town, South Africa, where she is currently working on a variety of human rights issues affecting women. Her areas of focus include, but are not limited to, gender-based violence, domestic violence, victim empowerment, relationship rights, and traditional courts.