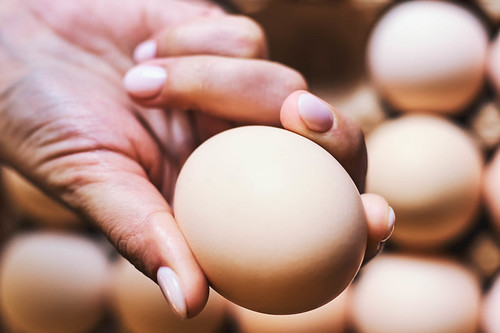 by wuestenigel via Flickr, used under a creative commons license CC BY 2.0.

To Eat or Not to Eat: Analysing the Constitutionality of the Meat Bans in Gujarat

About Sukrut Khandekar and Ishika Garg

Image description: A person holding an egg against the background of a stack of eggs.

Recently, the Municipal Corporation of Ahmedabad (India) banned street vendors from selling meat, fish and eggs on main roads and within 100 metres of schools, colleges and religious places. Such a wide restriction would virtually encompass the city’s entire geographical area.  Similar restrictions have been imposed by the municipal bodies in three other cities in Gujarat. These bans are constitutionally unsound and taint the socially diverse fabric of the Indian democracy. In this blog, the authors argue that these bans violate the right to (choice of) food of lower caste communities.

Indian courts have recognised the right to food under Article 21 of the Constitution. In examining violations of this right, courts have accounted for the nutritional needs of the affected population. Studies show that lower caste communities depend on meat as their primary protein-source. ​​This is because these societal segments are often unable to afford other protein-rich foods like milk. Thus, they rely on bovine flesh and other meat which lie within their financial reach. The bans in question affect their right to food by depriving them of the most economically affordable route to fulfilling their nutritional needs.

Moreover, the bans also impinge on the right to choice of food, guaranteed under Article 21 of the Constitution. Courts have held that as far as the choice of eating food is concerned, the citizens are to be let alone, especially when the food of their choice is not injurious to their health. Any State intrusion on the personal life of an individual is prohibited by the right to privacy, an essential concomitant of the right to personal liberty enshrined under Article 21. This reasoning was reaffirmed in Puttaswamy, wherein it was held that the ability of an individual to make choices lies at the core of the human personality, and without the ability to make choices, the inviolability of the personality would be in doubt. Such ability invariably includes the right to choice of food, which is violated by arbitrary restrictions on the sale of non-vegetarian food.

In the past, courts have allowed certain restrictions on the right to choice of food. For instance, a temporary ban on the sale of meat in Ahmedabad was approved by the courts. However, this was because the ban was not for a ‘considerable period of time’, but only for a limited period of nine days. Presently, it seems that the bans in question are to be effectuated permanently, failing the ‘considerable period’ test. In another case, the ban on the sale of eggs and meat in Rishikesh was allowed due to the fact that religious beliefs of most of the town’s population were against the consumption of meat. Thus, the ban did not substantially affect the food consumption habits of the population. Since close to half of Gujarat’s population eats meat, the bans in four of its most populated cities substantially affect the food consumption patterns of the residents, and thus cannot be justified. To determine whether a restriction on the right to choice of food is constitutionally justifiable, regard must be had to the concrete four-pronged test laid in Puttaswamy.

As per this test: first, the action must be sanctioned by law; second, the action must be necessary in a democratic society for a legitimate aim; third, the extent of such interference must be proportionate to the need for it; and fourth, there must be procedural guarantees against the abuse of such interference. However, the bans fail on all four counts. Without issuing any official notifications, the civic bodies orally directed officials to take action against food stalls selling non-vegetarian food, making such actions legally unfounded. A state interference would pass the second prong of the test if it answered a “pressing social need”. However, in a democratic multi-cultural society, such bans enforcing vegetarianism cannot be seen as a response to any pressing social need. Furthermore, since nearly 40% of Gujarat eats meat, such virtually absolute restrictions can under no circumstances be regarded ‘proportionate’ to the ‘need’ for such interference. Finally, the civic bodies’ oral instructions have not been accompanied by any official notifications, let alone any procedural safeguards, making them unjustifiable as per the four-pronged test.

United Kingdom, Right to Food and Water
The Government is legally required under the International Covenant on Economic, Social and Cultural Rights ...