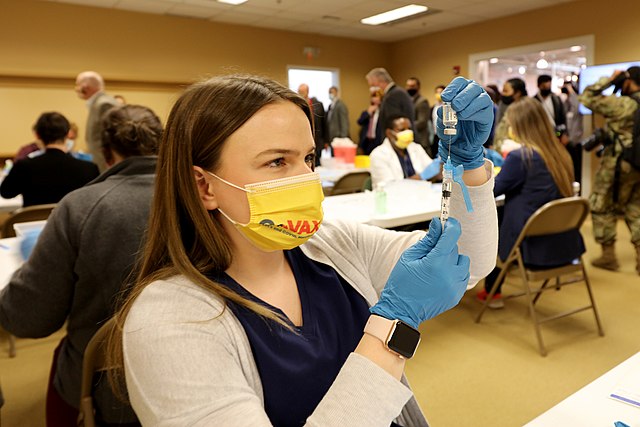 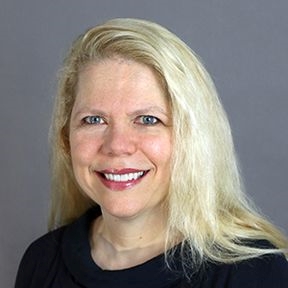 Image description: A woman with a vaccine at a mass vaccination site.

States have been divided on how to manage coronavirus, with some states such as New York and New Jersey imposing state-wide vaccine mandates for some workplaces to protect the human rights of individuals who would otherwise be forced to interact with unvaccinated individuals who are five times more likely to spread coronavirus. Certain states, such as California, are looking to tighten their mandates for similar reasons. By contrast, other states have extended human rights protections to its citizens to prohibit discrimination based on vaccination status. For example, Montana has recently enacted a law that broadly prohibits a private person or the government from discriminating against a person in educational opportunities, employment, health care access, and other services based on vaccination status.

New York’s case is exceptional because it mandates vaccines for healthcare workers but provides no religious exemptions. Announcement of this law resulted in immediate protest from some healthcare workers, whose religious convictions forbade coronavirus vaccination. In December 2021, United States Supreme Court Justice Sonia Sotomayor denied, without opinion, an application for emergency injunctive relief from several members of the New York medical community, requesting the Court to enjoin New York’s vaccine mandate for failing to provide a religious exemption. Justice Clarence Thomas dissented, without opinion. Justice Gorsuch, joined by Justice Alito, dissented. The decision is just a preliminary order, but it gives insight into how the Court might ultimately rule. This is especially true for the dissent, which chose to explain in detail why, in its view, the applicants are likely ultimately to succeed on the merits and therefore why the Court should have enjoined the New York law until the Court can issue its decision. In the dissent’s view, New York has displayed animosity against healthcare workers who “cannot receive a COVID–19 vaccine because their religion teaches them to oppose abortion in any form, and because each of the currently available vaccines has depended upon abortion-derived fetal cell lines in its production or testing.” The dissent also raised concerns that unvaccinated healthcare workers will lose both their jobs and their eligibility for unemployment insurance for refusing to be vaccinated because of their sincerely held religious belief.

While the dissent artfully explored the individual human rights of unvaccinated healthcare workers, including their religious liberties and socioeconomic rights, it simultaneously trivialised the communitarian rights of the people to state protection of their general welfare and the individual human rights of people with disabilities who are especially vulnerable to COVID-19’s worst effects. Even in liberty-loving America, the harm principle—freedom to extend one person’s arm ends where another person’s nose begins—applies. So, which is more irreparable: a healthcare worker losing her job standing up for religious freedom in a country that tends to devalue workers’ socio-economic rights or a patient losing his life because an unvaccinated healthcare worker passed along an infectious disease in a country that has yet to come to consensus on the question of whether healthcare is a human right? These conflicting values are at the heart of these debates.