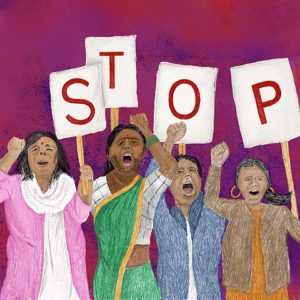 Image Description: A sketch of four women protesting against gender-based violence and holding a poster which says ‘STOP’.

A 2020 report estimated that about 1000 women and girls are killed on the pretext of honour in Pakistan every year. ‘Honour Killing’ also known as ‘karo kari’ can be defined as extra-judicial killing of female relatives for allegedly bringing shame and dishonor to the family. Acts which are considered to bring dishonor to a family may include: marrying or having a relationship without the permission of their family, uploading revealing pictures on the social media etc.

In 2016, a famous celebrity Qandeel Baloch, known for uploading flirty and revealing pictures and videos on Facebook, was murdered by her brother Muhammad Wasim. Baloch’s murder sent shockwaves through Pakistan and hit headlines around the world. Initially, in a press conference and before a Magistrate, Wasim confessed to murdering his sister for bringing dishonor to the family. DNA results also confirmed that the murder was committed by her brother.  On 27.09.2019, the Trial Court convicted Wasim and sentenced him to life imprisonment for the honour killing of his sister under S. 311 of the Pakistan Penal Code (PPC).

It is important to note that the Qisas and Diyat laws in Pakistan made the offences related to murder compoundable in 1990. Honour killings are mostly committed by relatives or family members. The murders are often forgiven by the legal heirs of the victim, who are complicit in the honour killings. However, in order to deter the crime of honour killing, S.311 of the Pakistan Penal Code was amended by the Criminal Law (Amendment) (Offences in the Name or on pretext of Honour) 2016.  S.311 states: ‘’ …the court may, having regard to the facts and circumstances of the case, punish an offender against whom the right of qisas has been waived or compounded with death or imprisonment for life or imprisonment’’.

Nevertheless, significant loopholes remain in the law. In lieu of a confession by the accused or strong evidence against him/her, it is difficult to prove whether a ‘honour killing‘ was committed or a murder. Moreover, the language of the law leaves it up to the discretion of the Court to punish the accused in cases of honour killing.

In an appeal to the Lahore High Court (LHC), Wasim retracted his confession that he had killed his sister for honour.On 14.02.2022, the Lahore High Court (LHC) delivered the judgement in Muhammad Wasim v. The State and acquitted Wasim. The LHC held that his confession before the Magistrate suffered from illegalities and did not follow the guidelines laid down by the Supreme Court of Pakistan in the Azeem Khan and the Ahmed Omer cases. The LHC held that these included the unreasonable 30 minutes reconciliation time for the accused and the lack of clarity about whether Wasim’s handcuffs were removed while confessing. Therefore, the value of his confession diminished.

The Muhammad Wasim case highlights the loopholes in the 2016 Act. The judgment has brought public outcry throughout Pakistan. Nowhere in the judgment were gender-based violence or women’s human rights discussed.

In line with Pakistan’s national and international obligations, the State must abolish the Qisas and Diyat laws that allow compromise in the offence of murder. Moreover, the lower judiciary must be trained on observing the proper method and rules while recording confessions. The 2016 Act should be amended and the discretion given to the Court to punish the accused must be made mandatory in cases of honour killing.

India, Right to Equality and Non-Discrimination
Image description: The Parliament of India.  The issue of ‘honour killings’ has again come to the forefront of ...