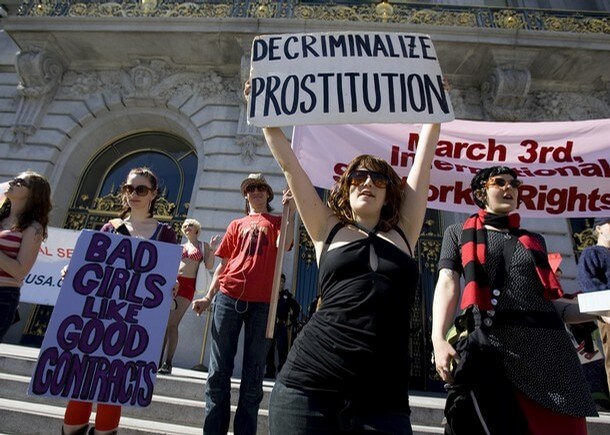 Sex workers and their supporters protest in front of City Hall.

Sex workers and their supporters protest in front of City Hall in celebration of International Sex Workers' Rights Day in San Francisco, California March 3, 2008. Dozens of sex workers marched to demand the decriminalization of adult prostitution, securing social recognition of sex work as a valid profession and establishing sex workers' right to self-determination. The movement started in India in 2001 when 25,000 sex workers mobilized together to raise awareness of the violence directed at sex workers and their lack of rights. REUTERS/Kimberly White (UNITED STATES)

In 2003, New Zealand decriminalised sex work and established a system of safeguards for those engaged in such work through the Prostitution Reform Act.  Just over a decade later, the first major case has been heard highlighting some of the benefits of this regime.

The case is called DML v Montgomery and M & T Enterprises Ltd. It involved a plaintiff, DML (whose name was suppressed), who alleged that the owner of a brothel at which she worked had sexually harassed her, causing humiliation, loss of dignity, and injury to her feelings.  The New Zealand Human Rights Review Tribunal (a body that deals mainly with discrimination, harassment, and privacy matters) ultimately found in favour of the plaintiff.  The Tribunal awarded the plaintiff NZD $25,000; issued a declaration and a restraining order (to prevent a continuing breach); and ordered that the brothel’s management staff undergo training to understand why sexual harassment is unacceptable.

Under s 62 of the New Zealand’s Human Rights Act 1993, four elements need to be satisfied for sexual harassment to be proven.  There must be: (i) language or visual material or physical behaviour of a sexual nature; (ii) that is unwelcome or offensive to a person; (iii) that is repeated or of a significant nature; and (iv) that has a detrimental effect.

The defendant claimed that given the brothel context, language that he used – including intrusive questions about the plaintiff’s sexual activity, information about his own sexual practices with other sex workers, and comments made to the plaintiff about her physical appearance – was not inappropriate. The Tribunal rejected this, saying that “[e]ven in a brothel language with a sexual dimension can be used inappropriately in suggestive, oppressive, or abusive circumstances” (at [106]).  It found that language of a sexual nature had been used (and that the plaintiff’s evidence was to be preferred to the defendant’s).

The second element was subjective, and was clearly met in this case.  The plaintiff was made to feel uncomfortable, did not want to have the conversations with the defendant that they had, and was upset and distressed.

The comments were made repeatedly – the language took 12 forms – meaning that the language was patently of a repeated nature: the third part of the test.

Fourth, there was manifest detriment caused.  The plaintiff had to work in a demeaning and hostile work environment; felt scared and degraded; stopped working at the brothel; and was already dealing with stress of giving evidence in a trial as a result of childhood sexual abuse when the comments were made. Accordingly, sexual harassment was established.

The employer was also found to be vicariously liable for this sexual harassment.

In the course of determining the appropriate remedies in this case (a declaration and restraining order, training order, and damages), the Tribunal made important comments about sex work and sexual harassment.  “Sex workers are as much entitled to protection from sexual harassment as those working in other occupations,” the Tribunal said at [146].  It added: “Sex workers have the same human rights as other workers.”

A debate continues about the merits of decriminalisation of sex work.  But this case highlights the concrete protections that the law can provide – when sex work law is reformed – to those in the sex work industry.