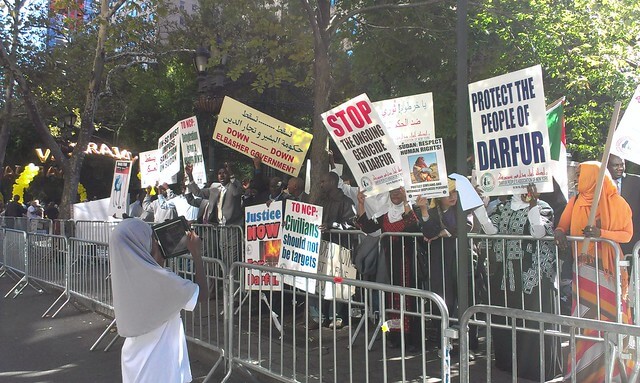 Protests Against Omar Al-Bashir. By Coalition for the ICC via Flickr under a creative commons license CC BY-NC-ND 2.0.

With the worsening situation in Sudan and the government’s systematic violations against the people of Sudan, questions arise about the fate of Omar al-Bashir (currently languishing in Sudan’s prisons), the immunity for Heads of States, if any, and the role of the International Criminal Court (ICC) and third States in securing justice.

Last month, the Appeals Chamber of the ICC found that the Hashemite Kingdom of Jordan, a State party to the Rome Statute, had failed to comply with its obligations under Article 27 of the Rome Statute, by refusing to surrender al-Bashir to the ICC while he was on Jordanian territory in 2017. It also affirmed the absence of Head of State immunity under customary international law, but reversed the Pre-Trial Chamber II (PTC II) decision and refused to refer Jordan to the Assembly of State Parties and the United Nations Security Council (UNSC) for non-cooperation. Then Head of State, al-Bashir, is wanted by the ICC for committing war crimes, crimes against humanity, and genocide in Darfur since 2005. The UNSC referred the situation of Darfur to the ICC which later issued two arrest warrants. Al-Bashir’s case represents the confusion of international lawyers, scholars, and international institutions over Heads of State immunities and the interplay between Articles 27 and 98 of the Rome Statute.

Was Jordan, as a State member to the Rome Statue, obliged under international law to surrender al-Bashir to the ICC? Evolution of customary international law in relations to the question on Heads of State immunity arises at vertical and horizontal levels. While the former addresses immunities accruing to Heads of States vis-à-vis the ICC, the latter is concerned with third States executing a request from the ICC to arrest or to surrender the accused.  Article 27 clearly stipulates that any immunities of individuals with official capacity shall not bar the ICC from exercising its jurisdiction. Yet, Article 98 requires the ICC not to request the execution of arrest or surrender if that would require the requested State to violate its obligations under international law and agreements.

Provoking Articles 98, Jordan notified the ICC that al-Bashir enjoyed immunity on its territory in accordance with a pre-existing treaty, namely the 1953 Convention on the Privileges and Immunities of the Arab League. The treaty provides that ‘privileges and immunities are accorded to the representatives of Member States’ rendering the ICC’s request patently at odds with Article 98. Furthermore, Jordan argued that the UNSC Resolution 1593 did not expressly impose obligations on third States to lift the immunity on al-Bashir.

However, the Appeals Chamber held that ‘there is neither State practice nor opinio juris that would support the existence of Head of State immunity under customary international law vis-à-vis an international court’ and affirmed the absence of customary international law recognizing immunity ‘for the horizontal relationship between States when a State is requested by an international court to arrest and surrender the Head of State of another State’. With regard to Article 27, the Appeals Chamber asserted that it ‘is relevant not only to the adjudicatory jurisdiction of the Court, but also to the Court’s ‘enforcement jurisdiction vis-à-vis States Parties to the Rome Statute’.

The Appeals Chamber blurred the line between immunity of Heads of States before international courts and their immunity from arrests by other States by establishing that there is no immunity before international courts. It concluded that Article 98 is a procedural rule regarding when and if immunity exists. Addressing the legal nature of UNSC Resolutions, the Appeals Chamber asserted that by referencing the situation to the ICC, the UNSC had agreed on prosecution in accordance with the provisions of the Rome Statute including Article 27. Notably, regardless of whether the Heads of State are from a member State to the Rome Statute or have been implicated by the UNSC, the ICC has jurisdiction over them.

The argument of Heads of State immunity remains at the crux of this legal puzzle. Currently, al-Bashir is being held in Khartoum’s prison for corruption charges. However, given Sudan’s dysfunctional court system, al-Bashir’s international crimes, the UNSC resolution, and the Appeals Chamber’s decision, Sudan is fully responsible for executing the arrest warrants against al-Bashir.

Afghanistan, Conflict and Human Rights, Criminal Justice and Fair Trial
On 5 March 2020, after more than a decade of preliminary examination, and the initial rejection by Pre-Trial ...