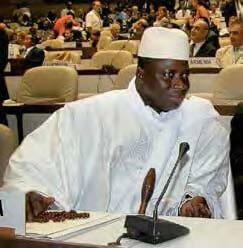 Detainees are held on suspicion of treason at Gambia’s Mile 2 Prison, where accounts of torture and forced confessions abound. A corrupt criminal justice system facilitates placement of political enemies on death row.

Last Autumn, the world witnessed a fleeting frenzy when The Gambia’s eccentric President Jammeh resumed executions for prisoners condemned to death. These executions—the country’s first in 27 years—were soon halted amidst international protest, but not before nine lives had been lost. Media reports decried the popular vacation spot, revealing for a moment its more troubled reputation and harrowing human rights record. Months later, however, West Africa’s ‘Little Gem’ remains a celebrated holiday destination, with scant attention to Gambia’s ‘darker’ side, and the nine prisoners who lost their lives only six months ago.

Jammeh’s moratorium may have calmed the temporary global outcry, but his country’s criminal justice system remains deeply problematic. Whilst death row inmates may wonder when, if ever, the next round of executions may resume, human rights groups should still examine the conditions of indefinite detainment at Mile Two State Central Prison where they are held, without ignoring just how easy it is to end up there.

From confirmed cases of arbitrary detention to evidence of forced confessions, capital punishment can hardly avoid being a controversial tool beyond the primary debate. However, one issue that has received little attention is the accusation that the Gambian government employs corrupt ‘mercenary judges’.

Finally acknowledged by the US Department of State Human Rights reports, these foreign judges oversee ‘sensitive’ cases and are ‘particularly subject to executive pressure’. Senior members of the judiciary are imported from other Commonwealth countries and focus attention their on Chapter VII of Gambia’s criminal code. By broadly defining incitement and sedition, the Gambian legal system has managed to place anyone from missionaries to journalists behind bars under the pretence of treason, a charge that carries the death penalty.

Most commonly targeted, however, are members of security institutions. Consistently at odds with the state structures intended to keep the

country safe and intact, the executive regularly clears the top ranks of Gambia’s police force, military branches, and intelligence agency. Wave after wave of police, military, and intelligence leadership is removed as the President seeks to satisfy paranoia and consolidate power, with the judiciary caught in the middle of this tense and volatile battle.

Torture has become the preferred method of discovering the latest plots for rebellion, even if none exist. Victims accused of incitement, opposing the President, or crimes against the state’s sovereign authority tell of electric shocks, sexual torture, forced labour, mock executions, near-drownings, endless beatings, extrajudicial killings, and custodial deaths. Many more have simply disappeared. Others have fled pre-emptively, knowing that without due process, their time was coming, regardless of their deeds. But those that don’t escape are forced to make death row at Mile Two State Central Prison their home, amidst appalling detention conditions.

With a manipulated legal code, a hijacked judiciary, and law enforcement officials held hostage in a state of fear, Gambia’s criminal justice system will continue to entrench human rights abuse absent the same international pressure that halted last year’s executions. Most notably, Taiwan – Gambia’s blind-eye donor – will have to find its voice.