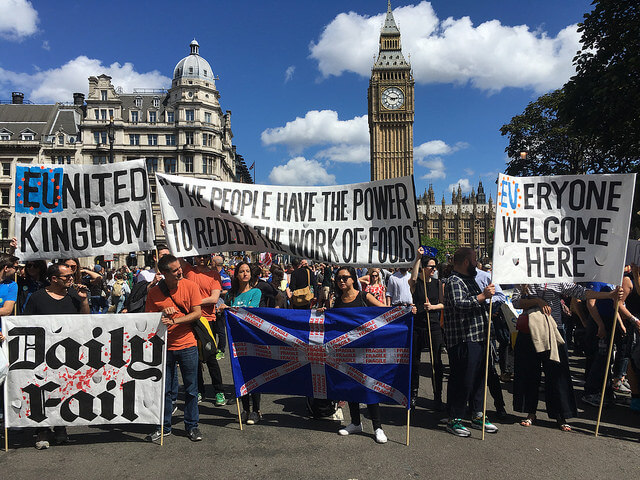 A #RightToStay Mass Lobby of Parliament, co-organised by the 3 Million and New Europeans, will take place on 20th February, coinciding with the ‘One Day without Us’ National Day of Action and, intriguingly, with the Bill’s Second Reading in the Lords. Image Credit: Alex, via flickr used under a Creative Commons Licence available at https://creativecommons.org/licenses/by-sa/2.0/

On 8th February, the  EU (Notification of Withdrawal) Bill passed Third Reading in the House of Commons, by 494 votes to 122.  MPs rejected all amendments to the 133-word Bill. This post concerns the rejection, by 332 votes to 290 of an amendment tabled by Harriet Harman, Chair of the Joint Committee on Human Rights (JCHR), designed to ensure that post-Brexit rights of non-UK EU citizens ‘lawfully resident in the UK on 23 June 2016’ will be guaranteed before the triggering of Article 50 and irrespective of the outcome of negotiations between the UK and Union institutions.

Only three Conservative MPs  voted for the amendment, after the Home Secretary had sent a letter to select MPs  assuring them that ‘nothing will change for EU citizens, whether already resident in the UK or moving from the EU, without Parliament’s approval’. The Government was joined by the DUP, UKIP, and six Labour MPs, including Gisela Stuart.  Stuart, former Chair of ‘Vote Leave’, chaired a British Future Inquiry into ‘Securing the status of EEA+ nationals in the UK’. The Inquiry’s December 2016 report concluded that ‘retrospective changes to [EEA+ nationals’] status are unfair as [those] who have settled in the UK could legitimately expect their status to remain secure when they moved here…The Inquiry recommends, as a cut-off date, the day that Article 50 is triggered’. Notably, this is a later ‘cut-off’ date than Harman’s amendment.

The follies of the Government’s reciprocity argument

There are substantive difficulties with the Government’s insistence on reciprocity, as reflected in Section 6 of its White Paper. The Commons debate revealed little zeal among MPs for making non-UK EU citizens’ status conditional upon reciprocity, let alone desire for en masse expulsion, should negotiations fail.

First, the claim that, the Government is protecting UK citizens residing in the EU-27 by refusing to unilaterally and unconditionally give non-UK EU citizens the reassurance they seek  is fanciful (I have written about their future status). Organisations representing UK citizens resident in Germany, Gibraltar, France, Spain, Finland, and Belgium signed a joint letter to the PM  urging her to unilaterally offer  guarantees to non-UK EU citizens. There is no evidence of hostility against UK citizens in the EU-27, and assigning blame to Union institutions for supposedly refusing to reach a reciprocal agreement before the UK serves its Article 50 notification is a red herring.

Second, the Government cannot have it both ways: if the fate of non-UK EU citizens will not depend on the outcome of the negotiations, the refusal to remove the uncertainty and to clarify the ‘cut-off’ date before negotiations commence is puzzling. The Government’s insistence on reciprocity logically implies that, if negotiations fail, rights of non-UK EU citizens may be curtailed. In 2017, such a ‘bargaining chips’ approach is morally indefensible.

Third, whereas it is within the unilateral gift of Westminster to secure the status and rights of non-UK EU citizens irrespective of the withdrawal agreement, reciprocity ipso facto requires agreement, and it is far from certain that it will be reached at an early stage of the negotiations.

It bears mentioning that non-UK EU citizens (except Maltese, Cypriot, and Irish citizens), and UK citizens who have been residing abroad for more than 15 years, were not eligible to vote in the 23rd June 2016 referendum, despite being (among) those most directly and adversely affected by its outcome (analysis).

The Bill now moves to the House of Lords. A #RightToStay Mass Lobby of Parliament, co-organised by the 3 Million and New Europeans, will take place on 20th February, coinciding with the ‘One Day without Us’ National Day of Action and, intriguingly, with the Bill’s Second Reading in the Lords.

Several Peers have already tabled amendments to the Bill, including in relation to non-UK EU citizens. One replicates the JCHR stipulation, whereas another extends beyond ‘rights of residence’ also to ‘other rights enjoyed by EU citizens’. The Government, which does not have a majority in the Lords, issued thinly veiled threats  that the future of the upper house is at risk were Peers to scupper Brexit; since securing the rights of non-UK EU nationals does not stand in the way of triggering Article 50, one remains hopeful that an amended Bill will be sent back to the Commons.

The Genocide Amendment: Why is the UK Government dragging its feet? (Part I)

European Union, United Kingdom, Brexit, Constitutions and Human Rights
Last week, the EU Withdrawal Bill returned to the Commons, so MPs could scrutinise and vote on amendments made to ...