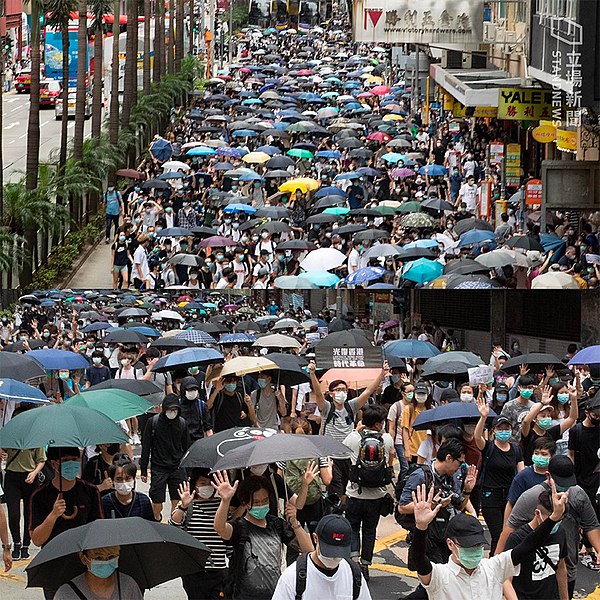 By 立場新聞, via Wikimedia Commons.

By 立場新聞, via Wikimedia Commons

Mathias Cheung is a barrister at Atkin Chambers in London and a BCL graduate from Magdalen College. He has a strong interest in constitutional law, human rights and comparative public law.

The press is always the first casualty of a new despotism. On 10 August 2020, Jimmy Lai, founder of the pro-democracy Apple Daily newspaper, was arrested in Hong Kong – the first in a wave of arrests, while over 100 police officers raided the newspaper’s offices for 9 hours. They were released on bail the following day, but with serious charges still dangling over their heads like the sword of Damocles.

The supposed crime? Alleged collusion with a foreign country or external elements, in violation of Article 29 of the National Security Law which Beijing has recently imposed on Hong Kong (carrying a maximum sentence of life imprisonment). Their real crime? Advocacy of democracy and vocal criticism of the Chinese and Hong Kong governments.

It was the darkest day yet for the freedom of speech and of the press, as enshrined in Article 27 of Hong Kong’s Basic Law and Article 19 of the International Covenant on Civil and Political Rights (ICCPR) (which are analogous to Article 10 of the European Convention on Human Rights). The provisions of the ICCPR have been incorporated into Hong Kong law by the Bill of Rights Ordinance (BORO), and Article 39 of the Basic Law expressly guarantees that the provisions of the ICCPR shall be implemented through the laws of Hong Kong.

The fundamental freedoms protected by Hong Kong’s constitutional order do not exist in a vacuum, and when construing the BORO, the Hong Kong courts have long recognised that “General Comments and decisions of the Human Rights Committee, decisions of the European Court, the Court of Human Rights and European Commission of Human Rights, as well as decisions taken in common law jurisdictions which contain a constitutionally entrenched Bill of Rights are of the greatest assistance and shall be given considerable weight”.

The violations arising from the recent arrests were therefore threefold.

First, the arrest of journalists on loosely-defined grounds of ‘collusion’ without cogent evidence of any national security threat is a textbook interference with free speech. The UN Human Rights Committee (UNHRC) emphasised in General Comment No. 34 that it is incompatible with Article 19(3) of the ICCPR to invoke treason laws “…to suppress or withhold from the public information of legitimate public interest that does not harm national security or to prosecute journalists…” (paragraph 30), and in its views concerning communication no. 2441/2014 (a Kazakh newspaper which was suspended on ‘national security’ grounds and whose editor was arrested at a protest), the UNHRC observed at [13.6] that the “…penalization of a journalist solely for being critical of the Government or the political social system espoused by the Government can never be considered to be a necessary restriction of freedom of expression”.

Second, the weaponisation of the law against pro-democracy journalism is itself a violation of the government’s positive obligation to protect free speech (as recognised in e.g. Özgür Gündem v Turkey (application no. 23144/93) at [43]). Zero consideration has been given to Human Rights Council resolution 33/2, which admonished States “to ensure that measures to… preserve national security or public order are in compliance with their obligations under international law and do not arbitrarily or unduly hinder the work and safety of journalists, including through arbitrary arrest or detention, or the threat thereof” (paragraph 10).

Third, the search/seizure of journalistic materials during the police raid patently went beyond the scope of the search warrant – it was an unlawful intrusion upon journalistic sources and press freedom. As Hartmann J stressed in So Wing Keung v Sing Tao Ltd (HCMP 1833/2004) at [47]–[48] (in refusing to issue search warrants for journalistic materials): “If [a free press] is to act as the eyes and ears of all concerned citizens it must be able… to protect the identity of those willing to pass on such information”.

Government mouthpieces have characterised Apple Daily as a biased ‘political group’, which confirms that the arrests were politically motivated. Absent any incitement to violence, the government simply “…cannot, with reference to the protection of territorial integrity or national security… restrict the right of the public to be informed of [political ideas] by bringing the weight of the criminal law to bear on the media”: Şener v Turkey (application no. 26680/95) at [42].

The purpose of every assault on free speech is its chilling effect, but the people of Hong Kong will not be silenced. This much is clear from the city-wide protests and global outcry in the wake of the egregious arrests. With each draconian crackdown, the voices of discontent would increasingly ring out like John Milton’s Areopagitica: “Give me the liberty to know, to utter, and to argue freely according to conscience, above all liberties.”