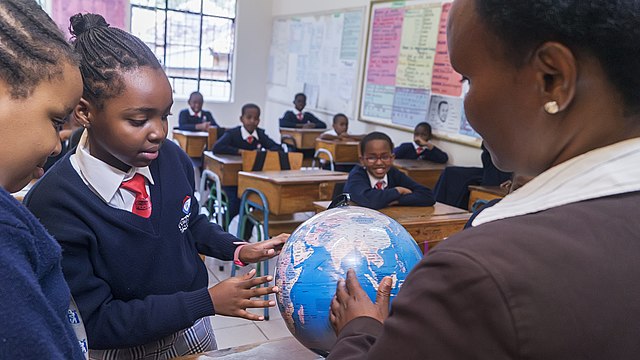 By Nduati.githae via wikimedia commons, used under a creative commons license CC BY-SA 4.0.

Alvin Attalo, “Kenyan Lessons on the right to education as a human right amidst the Covid-19 Pandemic”, (OxHRH Blog, November 2020), <https://ohrh.law.ox.ac.uk//kenyan-lessons-on-the-right-to-education-as-a-human-right-amidst-the-covid-19-pandemic> [Date of access].

In BPA v Directors, Brookhouse Schools,  a group of parents ofminors at Brookhouse Schools, a private school, challenged the introduction of the virtual learning programme, following the shutdown of schools by the Ministry of Education due to the Covid-19 pandemic.

In support of their case, the petitioners argued that the school administration’s decision to conduct virtual classes while charging fees similar to what the school offered before the pandemic violated their consumer rights under Article 46 of the Kenyan Constitution as it was unconscionable and unfair. This was because by shifting to online classes, the school was not providing certain courses, facilities and services, contrary to the initial contractual terms. Further, the quality of education provided was poor, in violation of the right to free and compulsory education, since quality was central to realization of this right.

They further argued that the Covid-19 pandemic had unforeseen deleterious effects on businesses and the paltry 10% discount offered by the school paled in comparison to the up to 50% discount offered by other members of the Inspired Group of schools. Additionally, the school failed to involve the parents in the alternative learning arrangements and in fact had frustrated efforts towards the formation of a parents’ association.

The Respondents argued that the agreements it entered with the parents at the point of their children’s enrollment were private contracts that could only be void if proved that they were procured through fraud, misrepresentation or undue influence. It was further argued issues raised were contractual and not human rights in nature and any interference by the court would undermine the principle of party autonomy in contract negotiations.

The court however held that the dispute qualified as a human rights claim since the violation of consumer rights attracted both statutory and constitutional remedies. The current dispute also involved the right to education and the principle of the best interests of the child which entailed an interpretation of the Constitution.

Reasons the suit was defeated

According to the court, the Petitioners ought to have sought termination of their contracts given that they claimed they had substantially different terms to their original contract.

The Petitioners’ claim as to the quality of the education could not be sustained as they had failed to provide evidence of the inferiority of online classes.  Additionally, it was held that it would be unjust for parents who willingly and voluntarily enroll their children in private schools to demand a reduction of school fees on the ground that the fees charged violates the constitutional right to free and basic education. While basic education is supposed to be free for all children, parents who opt to enroll their children in private schools are expected to meet the cost.

The Petitioners allegation of infringement of consumer rights by way of unfair practices also failed. This was because the Petitioners had failed to provide evidence of unconscionable representation as required by Section 13(2)(b) of the Consumer Protection Act, namely that the Respondents charged fees higher than their counterpart schools. Barring this, the Respondents were at liberty to charge whatever fees they desired. It was the responsibility of the Parties to conduct research in order to determine the discount that should have been afforded to parents. This had not been done and thus the court could not determine if the discount percentage was fair to all parties.

As to meaningful participation in the decision to conduct online classes, the consultation that took place at the time of the introduction of virtual learning was found to be adequate for two reasons: firstly, the Respondent’s averments that they immediately brought parents on board following the closure of schools due to the pandemic was not rebutted. Secondly, the closure of schools was abrupt and there was no time for meaningful engagement as the Respondents were nonetheless required to discharge their obligations.

Although the Petitioner’s claimed largely failed, the case has provided a blueprint for contesting the quality of education, with specific lessons on evidentiary thresholds. It however sets a dangerous precedent for public participation in times of emergency.