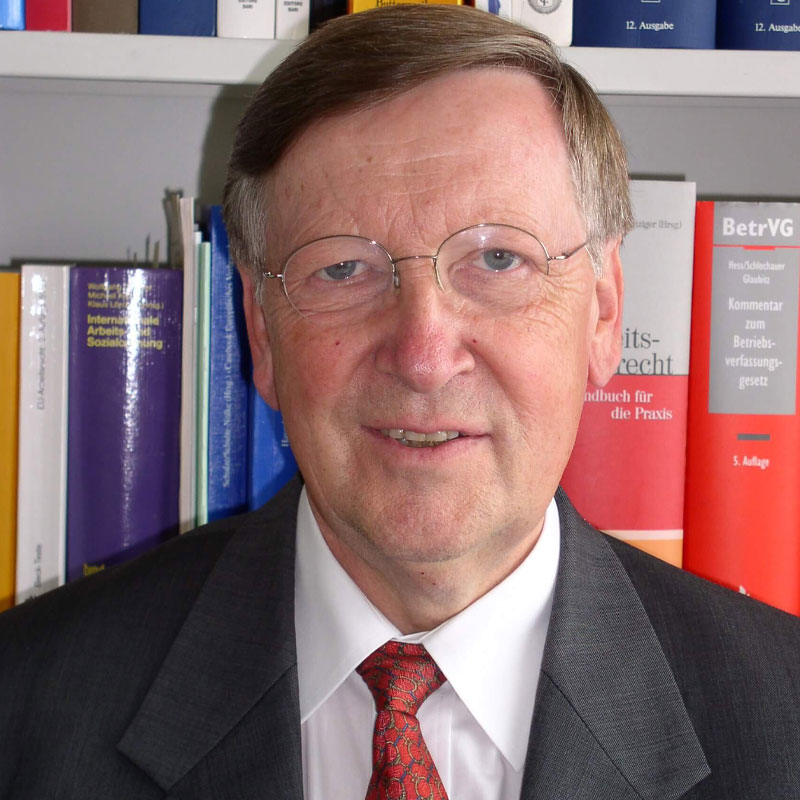 Manfred Weiss has been professor of labour law and civil law since 1974 at the Law School of the University in Hamburg and then (from 1977 to 2008) at the Law School of the Goethe University in Frankfurt. He has been the editor of leading labour law journals, held numerous visiting professorships and been a consultant for both the ILO and EU Commission over the last three decades. In 2015 he was the recipient of the LLRN-Award for outstanding contribution to labour law.

Continuing our special series of posts paying tribute to the life and work of Professor Sir Bob Hepple QC, Manfred Weiss reflects on Bob Hepple’s extensive scholarship on labour law across many jurisdictions.

It was really a great privilege for me to have known Bob Hepple for almost 40 years. This has not only led to a continuous exchange of ideas and cooperation from time to time but also, and most significantly, to the development of a close and precious friendship.

As a young South African, Bob was deeply involved in the struggle against apartheid. He became Nelson Mandela’s lawyer and was later to be arrested, before fleeing to England. One might be tempted to see Bob’s time in South Africa and in England as two separate lives, here the fighter against apartheid, and there the celebrated academic. But this would not be correct. His “first” and “second” life were closely interrelated. His compassion for social justice and opposition to any sort of discrimination were essential parts of his luggage that he brought from South Africa. It led the direction for his future career.

Bob was not only a giant of British labour law but one of the most prominent authors in international, European and comparative labour law. Through his numerous publications he has to a great extent shaped the international debate. This applies, for example, to his fight for social (fundamental) rights as well as for the worldwide recognition of human rights in general. His universal approach is particularly well demonstrated in his book on “Labour Laws and Global Trade”, published in 2005.

This text has become one the most quoted sources in international and comparative labour law. In it, he tried to find an answer to the question of whether and how “the race to the bottom” in the globalised economy can be turned into a “race to the top”. Bob’s focus was on the framework needed for a development in which the global population as a whole is able to profit from globalisation. His approach was based on a critical analysis of the economic theories of the balance between free competition and labour market regulation, as well as on a careful analysis of the already existing international, regional and transnational instruments. The guiding line throughout the whole book is Bob’s assumption that transnational labour law is not an obstacle but a necessary precondition for the potential of globalisation. He ends up again at the fundamental social rights which he considers to have the biggest potential in directing the way to go. Finally, in a very detailed analysis, he again demonstrates on the basis of economic theory that labour law systems which regulate working conditions in a fair and efficient way do not lead to competitive disadvantage but rather promote skills and productivity. In short and to make the point: in an interdisciplinary effort, Bob shows the deficiencies and the potential of international, regional and transnational instruments and thereby provides guidance on how to structure globalisation in a way which not only benefits big business but also the workers and societies as a whole.

Another important merit of Bob is his work on the history of labour law. Together with two different groups of researchers he edited two volumes providing an authoritative comparative analysis of the development of labour law in Europe, first the period leading up to 1945 (the Making of Labour Law) and second, the era that followed on from this (the Transformation of Labour Law). These volumes are an indispensable source for anybody interested in the history of labour law.

Bob was not only was a great scholar, he also was a wonderful human being. His kindness, his integrity, his modesty, his charming attitude, his generosity and – last but not least – his sense of humour, were characteristic traits which made it a pleasure to be with him. When another academic award was presented to Bob at the University of Kent in July of this year, adding to the many honours already conveyed to him, he took the opportunity to lecture on the difference between knowledge and wisdom. There is no doubt that he was the prototype of a man of wisdom.

For me and for many of us, Bob was a role model. The international scholarly labour law community suffers a great loss. I am grateful for having enjoyed his friendship; I will never forget him and I miss him badly.

A Gay Kiss on the Internet: Can Strasbourg Litigation Help Win the War Against Homophobia?