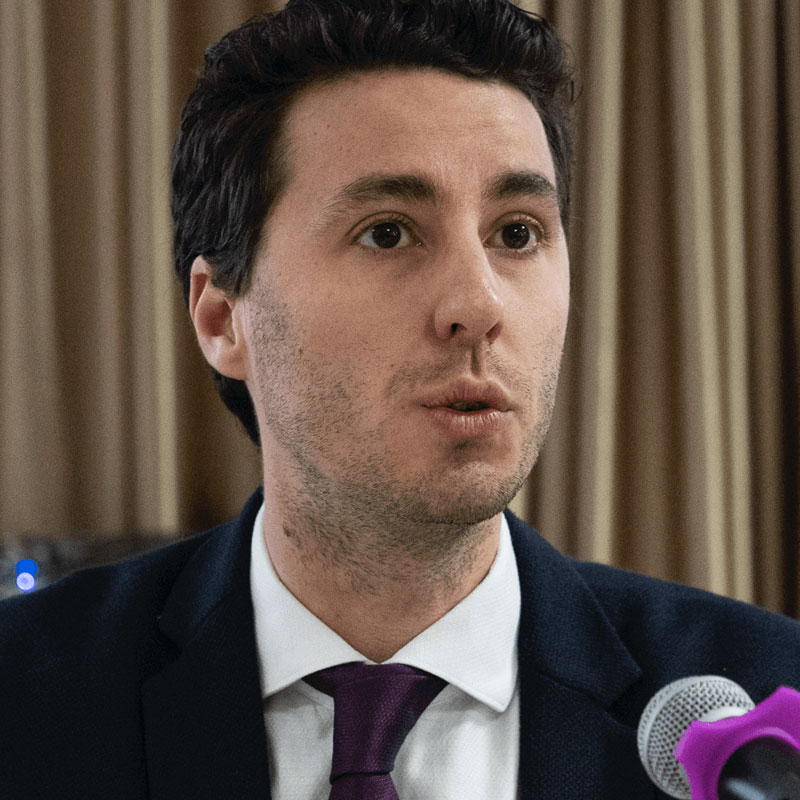 Cono Giardullo is associate fellow within the Istituto Affari Internazionali's Eastern Europe and Eurasia programme. His current research interests include Ukraine, the rule of law reforms and the use of new technologies in the field of human rights and humanitarian law. Since 2015, he has been working for the OSCE Special Monitoring Mission to Ukraine, and is currently involved in developing an innovative approach to the use of drones for human rights and humanitarian purposes. Previously, he worked at the EU Delegations to Kyrgyzstan and Tunisia. Cono graduated in Law at the University of Ferrara and obtained a MA in EU International Relations and Diplomacy studies from the College of Europe (Bruges). He is now attending the Master’s Programme in International Human Rights Law at University of Oxford. He is an Italian journalist since 2005. In 2012 his thesis on Italy-Libya agreements was awarded the national prize “A thesis to stop the torture” by ACAT Italy. In 2018, Cono also obtained the International Diploma in Humanitarian Assistance at Fordham University, thanks to a scholarship granted by the Besso Foundation.

Cono Giardullo “The American drone programme and the responsibility of its partners” (OxHRH Blog, 2019) <https://ohrh.law.ox.ac.uk/ > [Date of Access].

Since 2001, the Bush administration has taken the American drone program – to use automated weapons to kill targeted individuals outside of its own territory – to the next level, justifying it on the basis of the global War on Terror. In this context, as Pejic argues, while ‘technology can make it easier for States to decide to use lethal force abroad, […] all prohibition on the utilization of certain types of weapons based on international treaties and customary law apply to drones.’ With armed drones, the most relevant question debated is the use of such weapons for extraterritorial targeting in a non-belligerent State, where IHL and connected rules on proportionality and precaution do not apply.

The topic is even more relevant as President Trump has widened the scope of the drone program and according to Amnesty International, has rolled back already-limited protections for civilians, thus allowing looser standards for the use of lethal force outside situations of armed conflict. Because it is clear to most authors that drone strikes in the territory of a non-belligerent State would be legally justifiable only in very exceptional circumstances, it is relevant to also take a look at the support provided by European countries.

According to article 16 of the International Law Commission’s Articles on the Responsibility of States for Internationally Wrongful Acts (Articles on State Responsibility) a State bears direct responsibility if its organs or agents violate international human rights or humanitarian law, including extraterritorially. In particular, a State is complicit when it ‘aids or assists another State in the commission of an internationally wrongful act […if] that States does so with knowledge of the circumstances and the act is such that would have been wrongful had it been committed by the assisting State itself’.

Notably, the knowledge threshold has been thoroughly examined in the last few years. In the very recent judgment of the German Higher Administrative Court for North Rhine-Westphalia (here is an English translation to a related Press release) the judges held that Germany is constitutionally obliged to ascertain that the US drone strikes conducted via the Ramstein airbase are compatible with international law. Specifically, German authorities have to take efforts in order to ensure that international law is complied with. This means that Germany cannot base its assistance on mere assertions of compliance by the US.

Similarly, the UK has extensively looked into the question – through an ad hoc report – to ascertain whether its use of lethal force by drone without parliamentary approval, and its assistance to a partner country’s lethal use of drones, risks violating national and international law. The document is critical of the current position of the government, in particular due to the latter’s denial of the ECHR’s application to drone strikes conducted by the UK, or by other countries abroad. Because the UK has always praised itself of being a standard setter for good practices in the use of automated weapons, the report calls on the Government to pursue ‘its legal obligations, human rights, peace and security and the security of the UK’.

In the case of Italy, according to Amnesty, the US can operate their armed drones only upon authorization of the commander of the Sigonella air base, which may put Italy at heightened risk of directly assisting an unlawful drone strike. All in all, the Amnesty investigation recommends that supporting European states ‘refrain from assisting in any way in US drone strikes […] including by allowing the use of military bases, the sharing of intelligence and other information, or the provision of personnel’.

To conclude: the continuous appearance of contested territories in the post-Soviet Union space, and the use of armed drones, continue to add layers of incertitude over the level of extraterritorial protection of human rights states must ensure to citizens whose rights are found to be violated.