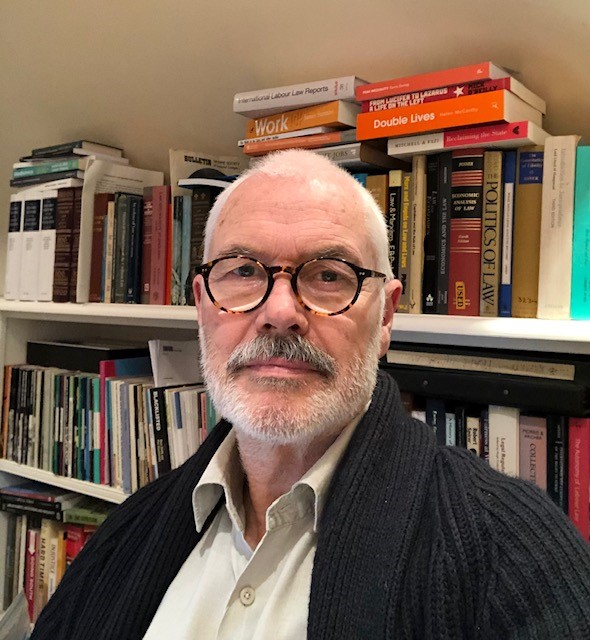 John Hendy QC is a barrister in London, UK. Called in 1972, after establishing and working in a law centre, he started practice at the Bar in 1977 and took silk in 1987. He is an Honorary Professor in the Faculty of Law, University College, London. As an advocate he is best known for his work in industrial relations and trade union law, having appeared in many of the UK’s leading collective labour law cases over the last 40 years, particularly in industrial action cases. He is Standing Counsel to eight UK unions. He has appeared in the European Court of Human Rights, the Court of Justice of the European Union, the UK Supreme Court (including the House of Lords and Privy Council), the Court of Appeal, the High Court and all courts and tribunals dealing with labour law below this level. He has appeared in the Irish Labour Court and the New South Wales Industrial Relations Court. He has acted for the Irish Congress of Trade Unions, and advised the European Trade Union Confederation, the International Transport Workers’ Federation and various European unions, and has acted as a consultant for the ITUC.

In his blog for the Human Rights Hub, Edwin Cameron criticised Ms Dinah Rose QC, the President of Magdalen, for accepting the brief, in the Privy Council, to defend the Cayman Islands government’s law against same-sex marriage. Having long been one of my few judicial heroes, it is not easy for me to disagree with Edwin. However, on this point he is, with the greatest of respect, wrong.

He accepts ‘the principle that even unpopular causes and litigants are entitled to counsel’. But then the question becomes: on what basis is counsel entitled to refuse to accept a brief for an unpopular litigant or cause. It surely cannot turn on whether counsel disagrees with the cause or the litigant, still less that counsel considers that the unpopularity of the cause or the litigant might damage counsel’s standing with those she admires or fears.

The repudiation of such considerations are reflected in the ‘cab rank rule’ by which a barrister, if free, is obliged to take any appropriate case (like a taxi on a cab rank). Many jurisdictions have such a rule to ensure access to justice and there is considerable literature examining the rule. It apparently originated from the time when admission to the Bar was granted by the Judges in return for which barristers were obliged to take cases allocated to them by the court.

A classic demonstration of the rule in action is provided by John Cooke, barrister of Gray’s Inn, who in 1649 felt obliged to accept the brief to prosecute Charles I for treason. On the Restoration in 1680, he was found guilty of treason himself and hanged, drawn and quartered for his earlier advocacy (though he ‘had neither been accuser, witness, jury, judge, or executioner’) (see G. Roberts, The Tyrannicide Brief (2005)).

The modern ‘cab rank rule’ for England and Wales is set out in the Bar Standards Board’s current (legally enforceable) Code of Conduct (paragraphs C21, C29, and C30).

These rules oblige a barrister to accept any case appropriate to their experience, seniority and/or field of practice, irrespective of the identity of the client, the nature of the case, and regardless of any belief or opinion which the barrister may have formed as to the character, reputation, cause, conduct, guilt or innocence of the client. This is the golden rule. There are exceptions.

In 2013 the Bar Standards Board commissioned an independent report to evaluate whether the rule was still relevant. The findings were clear: removing the cab rank principle would threaten access to justice; the rule protected the interests of the consumer by ensuring the availability of counsel. The report also noted that the rule also protected barristers (at least to some extent) from potential stigma in representing an unpopular cause or individual.

The UN ‘Basic Principles on the Role of Lawyers’, 1990 are apposite to the last point. Although addressed to criminal cases the principles are equally relevant to civil cases. They begin by declaring that ‘[a]ll persons are entitled to call upon the assistance of a lawyer of their choice to protect and establish their rights and to defend them…’ And governments are obliged to ensure that lawyers ‘shall not suffer, or be threatened with, prosecution or administrative, economic or other sanctions for any action taken in accordance with recognized professional duties, standards and ethics’. In particular, ‘[l]awyers shall not be identified with their clients or their clients’ causes as a result of discharging their functions’.

The need for protection for lawyers against identification with their clients is evident in many of the numerous cases supported by the International Association of Democratic Lawyers. Take the case of Aytaç Unsal and Ebru Timtik, Turkish advocates prosecuted and given long sentences for allegedly ‘going beyond the right of defense’. So unfair was their trial that they went on hunger strike in protest. In consequence, Timtik died in August 2020. Unsal, by then seriously ill, was released from prison a week later after 215 days of hunger strike. He was rearrested in December and is on hunger strike again.

As a barrister, like most colleagues (including, no doubt, Edwin when he was at the Bar) I have represented clients and causes regarded with contempt by the establishment. In matters such as representing the National Union of Mineworkers in the miners’ strike of 1984-5, or advising teachers of their right to refuse to work in dangerous conditions (S. 44, Employment Relations Act 1996) (for which I was portrayed in the Daily Mail a few months ago wearing a dunce’s cap), I have appreciated the warmth of the cab rank rule’s protection– at least so far as judges and opponents are concerned.

It is no answer to say, as Edwin does, that the particular client can choose amongst many other barristers. Once it is established that counsel is free to refuse cases of which she or some esteemed body of opinion disapproves, we enter dangerous territory. Dinah should not be criticised for accepting the brief – though, like Edwin, I hope her client loses.