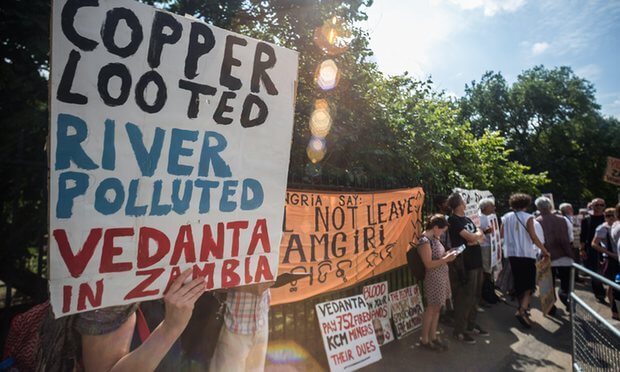 The recent UK Supreme Court case, Vedanta Resources Plc and another v Lungowe and others, affirms the principle that UK companies operating abroad owe a duty of care to those affected by the actions of the subsidiary in the foreign jurisdiction. The Supreme Court held that the ‘foreign jurisdiction’, in this case, Zambia, is the appropriate place to conduct legal proceedings. However, in cases where it is highly likely that obtaining justice will not be possible due to the claimants not being able to fund group claims and when there is a lack of suitable legal expertise – the Supreme Court will permit proceedings in the ‘anchoring jurisdiction’, in this case, England and Wales.

Nchanga Copper Mine operates near Chingola, a town in the Copperbelt Province of Zambia. Vedanta Resources Plc owns the mine through its subsidiary Konkola Copper Mines (KCM). It is the second largest open-cast mine in the world. Vedanta Resources Plc has faced legal actions for polluting local sources of water, which local villagers, fishers and nearby communities depend on to support their livelihood. Effluents from the Nchanga open-cast mine have continued to pollute sources of water in Chingola since Vedanta Resources Plc purchased KCM in 2004. This case has brought to light the negative environmental impact and poor human rights record that multinational corporations bring with their investment, especially when operating in poorer countries like Zambia.

Amongst other things, the Vedanta case illustrates that a duty of care to third parties arises when the parent company has established in its company policies that it exercises a degree of supervision over a subsidiary company operating in a foreign jurisdiction. Therefore, it was possible to find Vedanta Resources Plc in breach of its statutory duty when it failed to ensure its subsidiary did not act negligently towards third parties in Chingola. In this case, the alleged cutting of costs by KCM has led to acid spills which have contaminated the Kafue River and the Mushishima stream which four nearby communities – Kakosa, Hellen, Hippo Pool and Shimulala – depend on to sustain their livelihood. A weak commitment by Vedanta Resources Plc and KCM to comply with its Corporate Social Responsibility policies as well as national and international human rights obligations has caused harm to local farmers and families in Chingola.

The finding is a welcome step in protecting the human rights of communities in jurisdictions such as Zambia where the high level of poverty, a lack of legal aid, and the prohibition of conditional fee agreements under Zambian law limits access to justice for poor and marginalised communities – the most likely to be affected by multi-national corporations’ human rights abuses. In recognising some of the difficulties which may arise in other jurisdictions, this judgement provides a plausible alternative to obtain justice in cases where it would be difficult to do so in the foreign jurisdiction.

The principles affirmed in the Vedanta case should be followed in other jurisdictions and perhaps at an international treaty level. Such an approach will ensure that multi-national corporations are accountable for human rights abuses of their subsidiaries wherever they are domiciled.