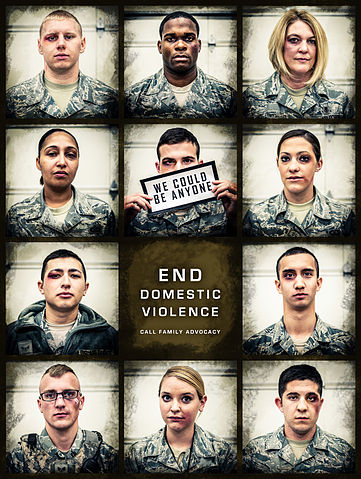 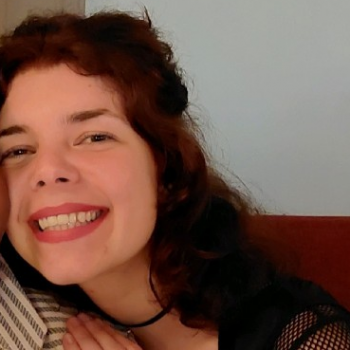 Sabrina is a doctoral candidate in law at the University of Oxford. Her research investigates how law can help bring an ethic of care to hostels and other accommodation-based responses for people experiencing ‘single homelessness’ and ‘complex needs.’ In between and alongside studying Sabrina has worked for homelessness charities. She now prefers to continue working alongside people experiencing homelessness informally and through research. She has also worked for legal aid law firms supporting people who have experienced domestic violence and criminal law firms which represent young homeless and socioeconomically disadvantaged defendants such as Herbert Smith Freehills’ The Shopfront Youth Legal Centre in Sydney.

Image description: A group of people, men and women, whose photos are arranged in a grid. Many of them bear injuries to the face. The square at the centre of the grid says ‘end domestic violence’. One person holds a card which says ‘we could be anyone’.

Almost a decade ago, on 16 July 2012, Mr C was killed by his boyfriend, Mr Y. Pursuant to the Domestic Violence Crime and Victims Act 2004, local authorities conducted a review into the circumstances of C’s death. According to the Review, Mr C had been assaulted over a period of months and probably years. He had seen multiple health professionals in the last years of his life, none of whom had picked up on the signs of abuse or asked about it. The Domestic Homicide Review concluded that:

‘it was likely that, despite the training, professionals did not identify this as domestic abuse – Mr C was male, gay, and older and Mr Y was younger…

a combination of his sex, race, sexual orientation, and his problematic alcohol misuse may have affected the care he received…

it may be that professionals in contact with Mr C responded less well to him because he was gay’.

As a matter of law, courts have been increasingly willing to acknowledge the role of human rights in addressing domestic abuse. It was held in Opuz v Turkey that the state’s failure to protect the applicant and her mother from domestic violence which culminated in her ex-husband killing her mother was a breach of Articles 2 and 3 (the prohibition on inhumane or degrading treatment) ECHR. The court also found a breach of Article 14 ECHR, the prohibition on discrimination, because the violence inflicted was gender-based within a climate of passivity and impunity for violence against women. The failure to protect women from violence breached women’s right to equal protection.

Regrettably, insufficient attention has been paid to domestic abuse in LGBTQ+ relationships. It is arguable that Mr C’s Article 14 rights (in conjunction with Articles 2 and 3) were breached by authorities’ failure to safeguard his life and protect him, as an LGBT+ person, from violence, in an exclusionary culture of ignorance around LGBT+ domestic abuse. The dominant public story of domestic abuse is ‘a problem of physically violent, heterosexual cisgender men for heterosexual cisgender woman’. This excludes LGBT+ people from mainstream ‘Violence Against Women and Girls’ domestic abuse services’ protection. Barriers to access include professionals failing to identify and respond effectively to abuse in same-sex relationships; and services failing to recognise distinct types of abuse particular to LGBT+ people, such as threatening to disclose sexual orientation or gender identity to family, friends, and colleagues; shaming partners for their orientation or gender identity; blaming them for discrimination they experience; or limiting access to LGBT+ communities.

Nearly a decade on from Mr C’s death, mainstream domestic services still fail to meet the needs of LGBT+ people. Research from 2020 indicates that more than 1/4 gay men and lesbian women and more than 1/3 bisexual people have reported at least one form of domestic abuse since the age of 16. Despite this, there are no stand-alone LGBT+ domestic abuse organisations and only 7 organisations which specifically deal with LGBT+ domestic abuse in the UK. Austerity saw the cutting of central and local government public sector funding between 2009/10 and 2019/20 by over £45 billion, and its GDP allocation falling from 21% to 12.6%. Of this, only 0.04% of national voluntary sector funding is now allocated to specialist LGBT+ services. In conditions of competition for public funding, these services can appear superfluous when larger organisations use the ‘sameness’ discourse of equality to claim to cater for everyone.

Human rights litigation could be utilised to force central and local governments to attend to the specific needs of LGBT+ victims and survivors of domestic abuse. Articles 2 and 3 with Article 14 ECHR may require the state to support small, local, specialist organisations run by and for LGBT+ survivors. These are uniquely positioned to be able to safeguard life. They can provide informed and effective care by and for LGBT+ people in contexts where their sexuality can increase vulnerability beyond domestic abuse, such as housing and sex work.

United Kingdom, Gender, Right to Equality and Non-Discrimination
The UK’s Draft Domestic Abuse Bill, 2019 has been described as a ‘landmark’ piece of legislation. This recognition ...