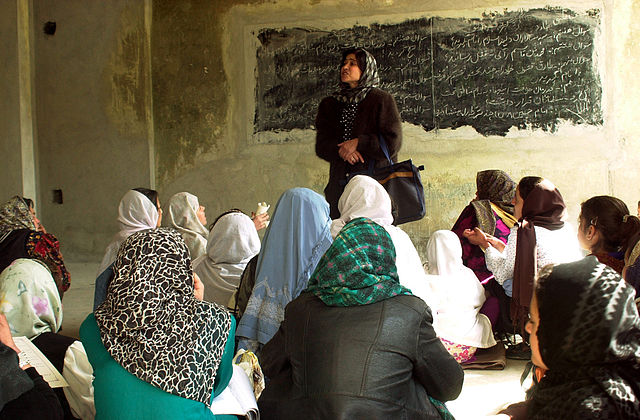 By Sgt 1st Class William A JonesUS Army This image was released by the United States Army with the ID 020311A8773J904 This tag does not indicate the copyright status of the attached work. A normal copyright tag is still required See CommonsLicensing https://commons.wikimedia.org/w/index.php?curid=20811651

Violence Against Women: Before and After the Taliban

Fahima Sirat is a former judge at the Afghan Anti-Corruption Justice Center. She is currently an academic visitor in the Oxford Law Faculty and associated with the Bonavero Institute of Human Rights and Centre for Socio-Legal Studies at Oxford University.

Image description: An Afghani woman teaching a classroom of girls.

Violence against women (VAW) is a global epidemic that affects all nationalities. VAW and long-term deprivation of human rights and freedoms are a bitter reality in Afghanistan. However, despite the discrimination, social and cultural barriers, two decades of democracy in Afghanistan provided an opportunity for women to further their struggle for the right to contribute to society as much as possible.

In 2009, in a major breakthrough, the Elimination of Violence Against Women Law (EVAW Law) was introduced. It defines violence as those acts which cause damage to the personality, body, property, and spirit of a woman. Twenty-two acts of violence were named in this law, including rape, forced prostitution, underage marriage, and deprivation of the right to education, work, and access to health services. Sentences can range from shorter terms of imprisonment to the death penalty. The law provides for measures to protect the rights of victims, namely: prosecution of the defendant, access to a support center or safe house, access to urgent and free health services, and access to legal aid. Alongside punishment, the defendant could also be required to pay compensation for damages.

To implement the EVAW Law, women’s support centers (safe houses) were set up in some provinces in Afghanistan, functioning as protective environments for women fleeing their homes due to violence. Along with the EVAW law, other measures were taken by the former government to protect women. This included appointing special prosecutors and establishing courts to combat violence, setting up the Ministry of Women’s Affairs, and providing for divorce through the creation of family courts, and enacting the Personal Status Law.

After the takeover by the Taliban, women who had struggled, worked, and studied under the umbrella of democracy and relative freedom for two decades lost everything. Women have been protesting continuously and bravely, demanding their rights. But the Taliban’s response has been warnings, threats, and beatings.

Currently, women are prevented from going to work, studying, and freely moving in society. They have to wear special clothing. As of 22 January 2022, the Taliban published posters obliging women to wear the burqa and the black veil, the chador. Women have responded by saying that the black veil is not part of their culture. The Taliban also prohibits women from wearing attractive colors in public, using perfume, and wearing high heels that make a sound when walking.

The Taliban have additionally taken freedom on the streets away from women. They have imposed limitations on the time and location for protests by women. Women are also banned from traveling without a male (mahram) family member. This has had a huge impact on women’s ability to escape abuse.

While previously the EVAW Law provided crucial support for Afghan women, under the current regime there is no similar law or court. The lack of a provision to prosecute crimes committed against women has created an environment of impunity for the perpetrators, making violence normal and acceptable. We hear about disturbing cases in social media. For instance, in one case a woman went to court to file a claim against her husband. A decision was made by the person in charge of security at the gates of the court that the woman must either live with her husband with dignity or be sent to prison. As a result, women can also no longer report abuse. This lack of access to the criminal justice system has made women particularly vulnerable. Safe houses, which the Taliban sees as having caused the collapse of families, have been closed.

Overall, the Taliban’s point of view about women is a traditionalist, cultural view embodied within religious dogmatism, according to which the voice of women, their faces, and the sound of women’s feet are considered lustful and forbidden. Indeed, to the Taliban, women are mentally deficient. In their view, a proper Afghan man would not allow his wife to appear outside the house, to interact with a man other than those in her family, nor to wear colorful clothing. The outlook for women’s rights is bleak. We continue to ponder over these questions:

Will girls be allowed to return to school?

Will women be allowed to work?

Will women have freedom of movement?

Will women and girls be forced to marry?

Will women’s human rights be respected?

Sadly, it is difficult to be optimistic.

Conflict and Human Rights Gender Right to Equality and Non-Discrimination