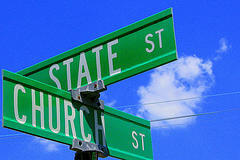 ‘Absolute Neutrality’ or ‘True Neutrality’? Atheism, Religion and the Supreme Court of Canada

What happens when an atheist individual contests the validity of a religious prayer traditionally recited at city council meetings? Is this individual granted constitutional protection on the basis of freedom of religion, and must the council refrain from reciting prayer? The Supreme Court of Canada has answered both questions in the affirmative.

In Mouvement laïque québécois v. Saguenay (City), the applicant, Alain Simoneau, regularly attended city council meetings, which began with a recitation of a Christian prayer. After Mr. Simoneau voiced his objections to the prayer, city council created a bylaw which regulated its recitation. Specifically, the bylaw provided for a two‑minute delay between the end of the prayer and the official opening of council meetings in order to allow individuals to recuse themselves from the prayer.

Mr. Simoneau successfully had the bylaw declared to be inoperative and of no force or effect by Quebec’s Human Rights Tribunal on the basis it infringed his rights under sections 3 and 10 of Quebec’s Charter of Human Rights and Freedoms (“Quebec Charter”). Section 3 of the Quebec Charter characterizes “freedom of religion” as a fundamental freedom, which accords with the classification given to religion under section 2(a) of the Canadian Charter of Rights and Freedoms (“Canadian Charter”). The decision was reversed by the Quebec Court of Appeal.

The Supreme Court restored the Tribunal’s decision, holding that the bylaw interfered in a discriminatory manner with Mr. Simoneau’s freedom of conscience and religion, and that the council’s recitation of the prayer amounted to “sponsorship of one religious tradition by the state”, thereby contravening its “duty of neutrality” (paras. 63-64).

With respect to the former aspect of the case, the Court held that for the purposes of the protections offered by both the Quebec Charter and the Canadian Charter, the concept of religion “encompass non‑belief, atheism and agnosticism” (para. 70).

A major tension in the case exists since the Court has classified atheism as a “religion”; if a person objects to a religious practice on the basis of his or her atheism, then cases like Saguenay could be viewed as cases of “competing religions”. If this is the case, some argue that prohibiting the state from showing traditional religious symbols or reciting prayers does not enforce a “duty of neutrality”, but instead results in the state being required to favour one religion over another.

The Court addressed this dilemma in their reasons by differentiating “absolute neutrality” from “true neutrality”, stating the latter position “presupposes that the state abstains from taking a position on questions of religion” (para. 132). It continued: “In short, there is a distinction between unbelief and true neutrality. True neutrality presupposes abstention, but it does not amount to a stand favouring one view over another. No such inference can be drawn from the state’s silence” (para. 134).

Two issues which the Court acknowledged, but did not elaborate greatly upon, were the references to the “supremacy of God” in the preamble of the Canadian Charter and the prayer recited before Canada’s House of Commons meetings, which make reference to “Almighty God”.

Regarding the former, the Court held that the preamble, including the reference to God, articulates a “political theory” upon which the Canadian Charter’s protections are based, but that its express provisions must be given a generous and expansive interpretation (para. 147).

The Court declined to address Parliament’s prayer without “detailed evidence on Parliament’s practice and circumstances thereof” (para. 143). Following the decision, the speaker of Canada’s Parliament stated he had no intention of changing the prayer.