The Individual and Structural Aspects of Gender Inequality at Work 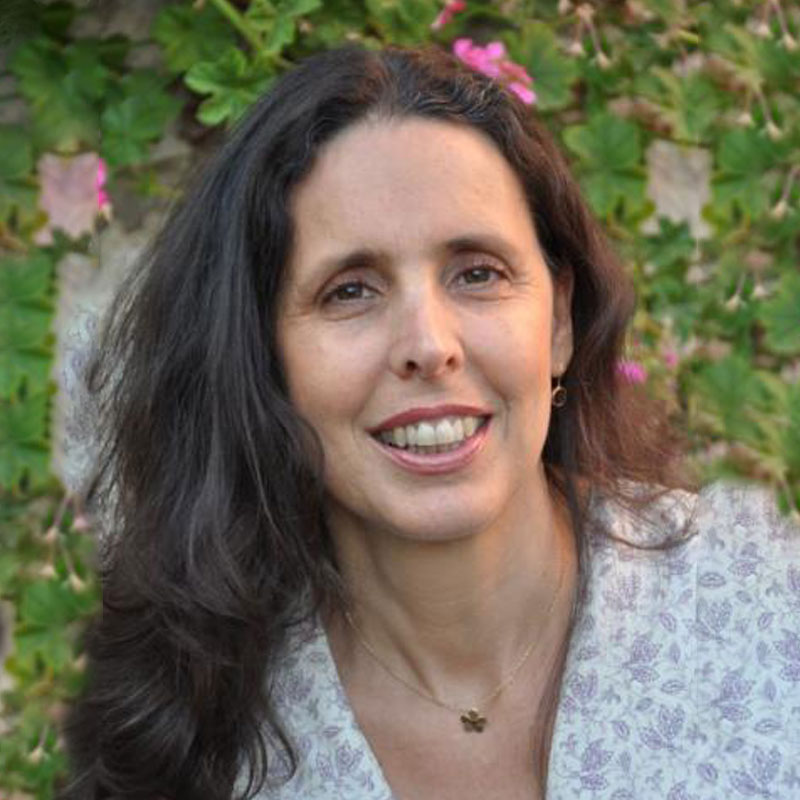 Hadas Mandel, is an Associate Professor in the Department of Sociology and Anthropology at Tel Aviv University. Her research focuses on the intersection between gender, class, and social policies; it addresses the complex and seemingly paradoxical economic implications of welfare state policies on women.

Hadas Mandel, “The Individual and Structural Aspects of Gender Inequality at Work” (OxHRH Blog, 2 May 2017) <https://ohrh.law.ox.ac.uk/domestic-violence-and-the-regressive-russian-amendment> [Date of Access]

Within the growing debate concerning the future of what has been termed as the “gender revolution,” two distinct voices can be heard. The more optimistic voice forecasts a continued reduction in gender inequality until its eventual disappearance. The less optimistic voice perceives the gender split as deeply rooted in the basic organization of social relations, and thus resistant to further fundamental changes.

Optimistic views of the gender revolution are based on well-observed trends documenting the erosion of barriers to women’s advancement over recent decades, such as the integration of women into politics and prestigious jobs in male-dominated occupations, convergences in gender pay gaps, and so on. What these appearances of gender in/equality share are that they focus on in/equality between men and women as individuals. In other words, they document differences between the average attainments of men and women in pay, in status, and in occupational attainments. What most empirical research on gender inequality disregards, however, are the structural mechanisms – those that relate to gender bias in the way jobs and activities are evaluated and rewarded in the labour market.

I propose to concretize the distinction between individual and structural mechanisms of gender in/equality by referring to occupational and wage structures. Individual-level mechanisms are those responsible for the unequal distribution of men and women on the reward structure (where men usually work in occupations on the higher rungs) and to unequal gender payment (whereby men, on average, receive higher pay relative to women in the same occupation). The structural mechanisms refer to the criteria underpinning the occupational structure (or the wage structure) itself or, more precisely, to the possible gendered bias of these criteria.

Despite broad acknowledgment of the lower economic rewards for female jobs and female work behaviour relative to male jobs and activities, the “gender effect” in empirical research of long-term trends is usually reduced to individual aspects: the gap in rewards between “similar” men and women, or the inferior location of women (vs. men) on a given, non-gendered, reward structure. The reward structure itself is assumed to be gender-neutral. Consequently, over-time trends in pay gaps between men and women, and in occupational attainments of women vs. men (individual level aspects) have been examined, while the empirical question concerning whether the occupational structure has become more or less affected by gender remains overlooked. 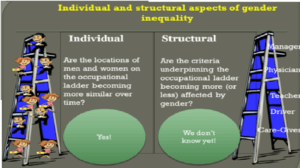 The figure above illustrates the distinction between the two questions:

On the basis of this distinction, I would like to raise several arguments and expectations regarding the significance of structural aspects of gender inequality:

First, unlike processes at the individual level, structural processes are less visible; they are often not recognized as gendered, and are consequently much more difficult to track empirically.

Second, the imbalance between empirical evidence of individual and structural processes of gender in/equality may results in an underestimation of the significance of gender as a stratifying force in society today.

Third, the focus on structural aspects of gender inequality is especially critical today. Following the penetration of women into the public and economic spheres, along with changes in legislation and the strengthening of liberal ideologies, discrimination against women as individuals has not only been outlawed, but has also gained public attention and lost social legitimacy. Consequently, and given the empirical challenge of tracking structural processes

Fourth, given the growing variation between women in recent decades, the two processes of gender in/equality can be expected to vary by class: between more and less advantaged women (individual level), and by groups of occupations (structural level). The investigation of these processes, thus, requires close scrutiny of the intersection between gender and class.

And last, because the investigation of long-term trends in individual vs. structural aspects of gender inequality carries clear practical consequences for the way societies can and should confront inequality, and because the two processes can be expected to operate differently in different institutional contexts, studies of gender in/equality should point to the different challenges that the different institutional contexts pose for each process.

Steinfeld v Secretary of State for Education: Court of Appeal has Granted Leave to Appeal

United Kingdom, Right to Equality and Non-Discrimination, Right to Privacy, Sexual Orientation
It has recently been announced that the challenge to the prohibition on opposite sex couples entering into civil ...