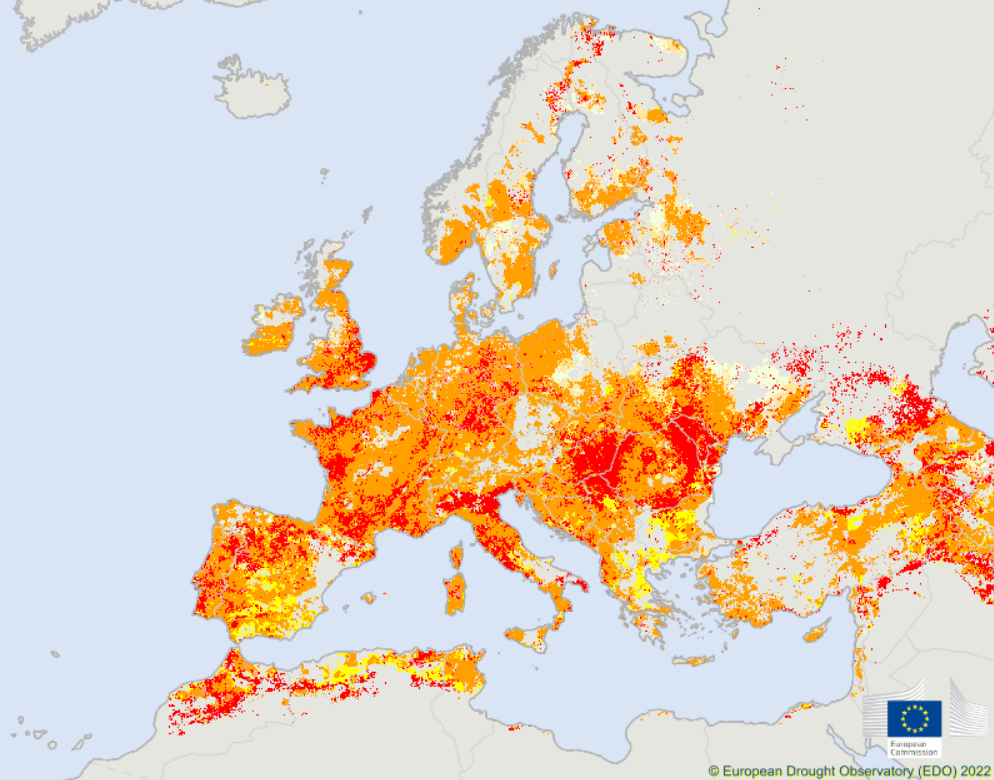 What do Rivers have to do with Human Rights? A Spotlight on Recent Problems

Olga Hałub-Kowalczyk is Assistant Professor at the Chair of Constitutional Law, Faculty of Law, Administration and Economics at the University of Wrocław in Poland. Her research focuses on constitutional law and human rights with a focus on the right to water and the right to healthy environment in the context of the sustainable development.

Image description: A map showing the extent of drought alerts in Europe in July 2022, with most of the region in shades of orange or red

A few weeks ago we witnessed the most serious environmental disaster in Poland’s history. This occurred in the Oder River and resulted in the mass deaths of fish and other inhabitants of the river. The sudden and hitherto unexplained outbreak of this ecological catastrophe has led to the deaths of billions of living organisms. In the meantime, it transpired that it is not only the Oder River that demands urgent solutions to improve the situation. According to the European Drought Observatory’s (EDO’s) latest report August 2022, other European rivers are also struggling intensely with climate change. Whatever the cause of pollution in the Oder, we must consider the extent to which the problem of escalating heat waves, the increase in water temperature, and the drying up of watercourses throughout Europe has become a problem in our everyday lives. Each of these issues also has significant implications for human rights.

The report ‘Drought in Europe 2022’ states that the consequences of global warming have continued to worsen since the beginning of this year. According to the authors, the deficit of precipitation has lead to 47 percent of Europe currently being at warning levels and 17 percent under active alert. This situation directly affects the levels of discharge into rivers. According to Low-Flow Index, numerous major European rivers are experiencing low flow. Catastrophic photographs of dry riverbeds published in the media remind us that global warming is no longer an issue for the future, but a current reality. This problem is already affecting fundamental survival needs, including access to sources of food, water, and energy. The transport capacity of barges is declining because of extremely low water levels on the Rhine. At the same time, low water levels of rivers are reducing the output of nuclear power plants because of the shortage of water for cooling the plants, as in the Garonne. Finally, drying up of watercourses affects the tourist sector  – as illustrated on the Po River and Lake Garda – and agriculture, with flow-on effects for the right to work, especially on family farms.

It is possible that Europe will face hydrological poverty for several years. The analysis of the latest EDO report enables us to understand that a broad range of human rights are already under threat, especially those directly related to human dignity. The current lack of appropriate water management in Europe relates to a broader problem of climate inaction from state actors. This is affirmed by a steadily increasing rate of climate litigation (e.g. Urgenda Foundation v the State of the Netherlands, Klimatická žaloba ČR v Czech Republic, A Sud et al. v Italy). The time is ripe to assess the effectiveness  and efficiency of human rights’ ability to enforce core positive obligations on public authorities (see further: K. G. Young, Constituting Economic and Social Rights, Oxford 2014) amid the current water crisis. The negligence of governments in tackling this crisis has the potential to affect personal freedom, health, and access to basic goods. For the purpose of increased protection for individuals against low levels of available water, provisions which directly relate to the protection of fundamental human needs will be of critical importance. The catalogue of such guarantees should include the right to water (General Comment No. 15 adopted by the Committee on Economic, Social and Cultural Rights [CESCR General Comment]), the right to food (CESCR General Comment No. 12), and the right to highest attainable standard of living (Article 11 of the International Covenant on Economic, Social and Cultural Rights). It is important that the problem of water accessibility and availability is understood as an autonomous right, and not treated solely as a component of the right to life, health, or privacy. This approach demands that the content of core obligations on public authorities be clearly defined, including the availability, physical and economic accessibility, and quality of water.

The appropriate protection of the human right to water calls for an integrated approach (about this approach see: M. Sepulveda, The Nature of the obligations under the International Covenant on Economic, Social and Cultural Rights, Utrecht 2003). This requires cooperation between public bodies (legislative institutions, local authorities and policymakers) responsible for the realisation of human rights at each stage. River management is emerging as a current and serious need which has the capacity to adversely affect human rights in the near future. Without urgent reform and attention to developing an effective water strategy with concrete core obligations for public authorities, the issue of limited access to ‘liquid gold’ in Europe will dramatically intensify.

Guatemala, Environment, Right to Food and Water, Socio-Economic Rights
Guatemala, the Land of Eternal Spring, is one of the most ecologically diverse nations on the planet and is ...

United Nations, Socio-Economic Rights
Water is indispensable to human survival and economic production. The management of water access has thus become a ...